In late April, a well-known Canadian anti-masker began livestreaming on Twitch from outside an Ontario police station.

“We’re gonna walk in there right now and we’re gonna deal with these idiots,” Chris Saccoccia says, as he leaves his vehicle and marches inside to get fingerprinted.

A day before, the man was arrested in Thunder Bay for breaching bail conditions (he wasn’t supposed to attend any anti-mask protest). On the livestream, he tells his followers how this fingerprinting was a secretive ploy for the government to get footage of him walking into the building with a mask on.

When inside the building he secretly films some of the officers and tells the camera these cops were “some of the worst police officers in Ontario… It’s one of the worst towns for police in all of Canada.” Eventually an officer spots him filming, and tells him to put his phone away; the freedom fighter dutifully obeys. When he returns for another Twitch stream an hour later, he declares his victory over the cops.

Saccoccia is one of several anti-mask and far-right influencers who have made the jump to Twitch, a long-form livestreaming service popular among gamers, after being de-platformed by more mainstream social media sites. The majority of streamers on the Amazon-owned Twitch are not anti-mask, far-right, or even that political, but for some anti-maskers, the platform is their last real hope to spread their message far and wide.

According to the New York Times, at least 20 far-right extremists and conspiracy theorists like Millie Weaver and RedPill78  have made Twitch their primary home and have been making money on it. The same goes for anti-mask influencers, who are being banned from Facebook, Instagram, and Twitter for spreading misinformation. Twitch streamers can get donations from their audience, and the long-form nature of the platform allows some to spread conspiracy theories unnoticed.

The wealthy son of a Vaughan, Ontario, home developer, Saccoccia recently moved to Twitch after Instagram booted his account, which had over 250,000 followers. He has been on a cross-country tour, which included a convoy which spectacularly failed‚ and has been chronicling his time and broadcasting his speeches—full of anti-mask and COVID conspiracy rhetoric—on his channel. Saccoccia, who is actively campaigning against vaccinations, recently livestreamed himself taking part in a Montreal anti-lockdown rally that forced a mass vaccination centre to postpone their appointments for a day. As outlined by the Canadian Anti-Hate Network, Saccoccia also has a troubling history of making racist statements and spreading antisemitic conspiracies.

Several other anti-mask channels, most of them with small followings, can easily be found on Twitch by searching. One account, flatearthfocker, only has uploaded videos of a rally Saccoccia held in Vancouver but from a different angle.

Not everyone has found success on Twitch. Over the past few months, Kevin J. Johnston  was regularly livestreaming a talk show, in which he demonized Muslims and spoke about how COVID isn't real. Johnston recently went viral after punching a grocery store manager after refusing to shop with a mask on. On his show he directed his fans to contact the store and manager.

“Twitch is a global community, not a free speech service,” a Twitch spokesperson told VICE World News. “We take action against users that violate our community policies against harmful content that encourages or incites self-destructive behaviour, harassment, or attempts or threatens to physically harm others, including through misinformation.”

Twitch is currently in the process of developing a misinformation policy. While it has a zero-tolerance policy for hate speech, the current guidelines allow for misinformation and conspiracy theories as long as they don’t cross the line into encouraging harm or harassment campaigns or inciting physical violence. 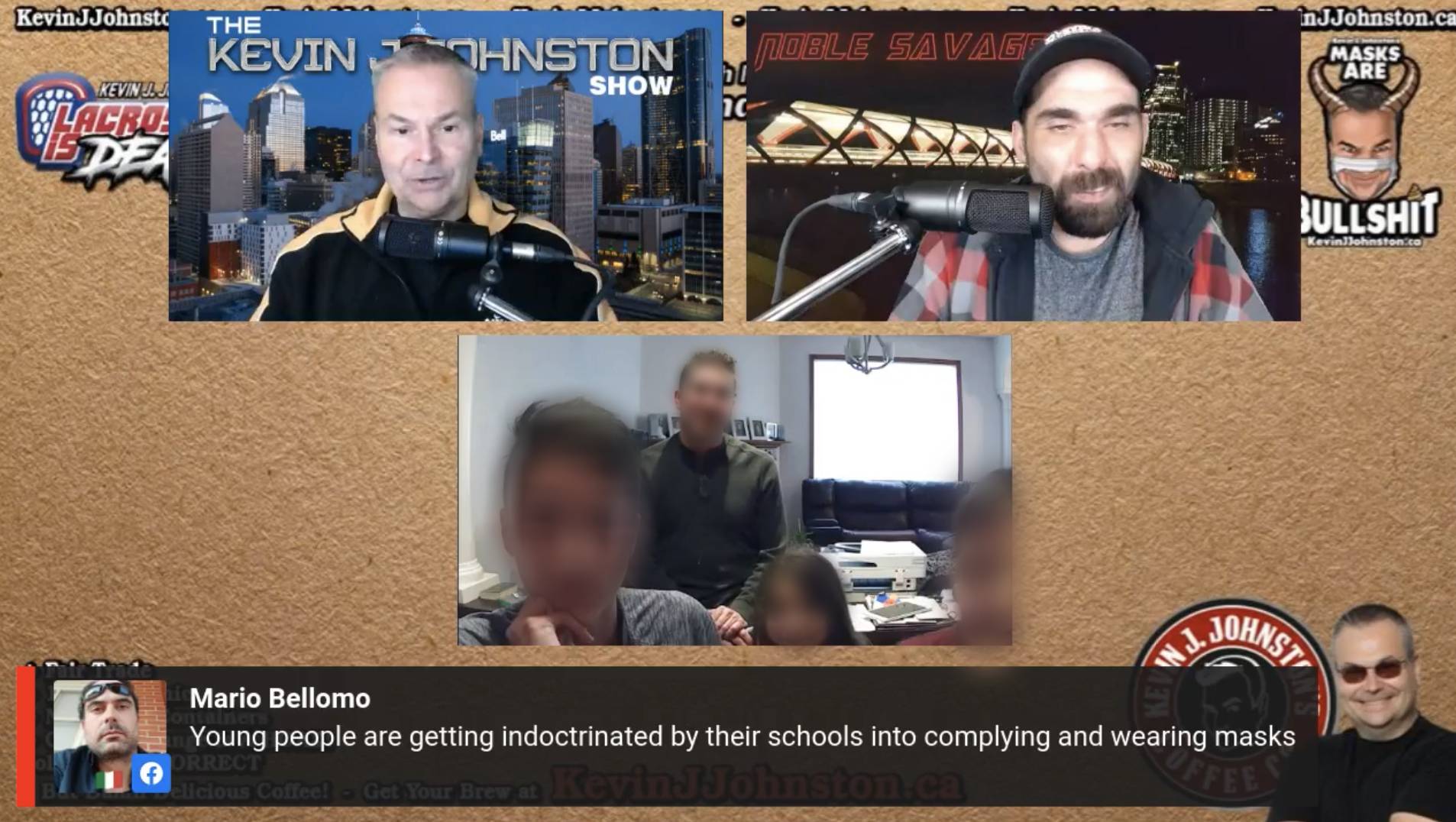 Kevin J Johnston livestreaming on Twitch with some of his followers children. Photo via screenshot.

Johnston has made several accounts in an attempt to get around his Twitch ban, but each one so far has been taken down. On one broadcast held on a burner account, Johnston had his followers bring their children onto the livestream with him to talk about how COVID was fake and lockdowns aren’t needed.

Pete Evans, a researcher with the Canadian Anti-Hate Network, told VICE World News in the end, it doesn’t matter where these anti-maskers go—they have an audience that will follow them from platform to platform.

“Twitch’s decision to remove these accounts can help in some ways to mitigate that spread, but ultimately their supporters' refusal or acceptance of these figures' bigotry are what continues to allow people like Kevin Johnston and Chris (Saccoccia) to continue thriving,” he said.