An ex-Canadian soldier who slipped into the U.S. illegally to join other members of the neo-Nazi terror group he was once a central part of, plead guilty to firearm charges today in a Maryland court.

Patrik Mathews, 27, is facing charges linked to an alleged plot to shoot-up a gun rights rally, his membership in The Base, and his illegal entry into the U.S. He and his co-accused, Brian Lemley Jr., who was once the Maryland cell-leader for The Base, were also accused of producing the drug D.M.T and making an illegal ghost-gun, with Mathews pleading guilty to the latter. Both are facing several decades in prison for their alleged crimes.

Court documents viewed by VICE show that Mathews and Lemely put in their guilty pleas on June 9. Journalists attending the court hearings on Thursday indicated the guilty pleas were for the firearm related charges. In December, the third defendant in the case, William Bilbrough, pleaded guilty to conspiracy to help transport Mathews, a Canadian and foreign-national, across the border illegally and was sentenced to five years in prison. Mathews will be sentenced in the fall. 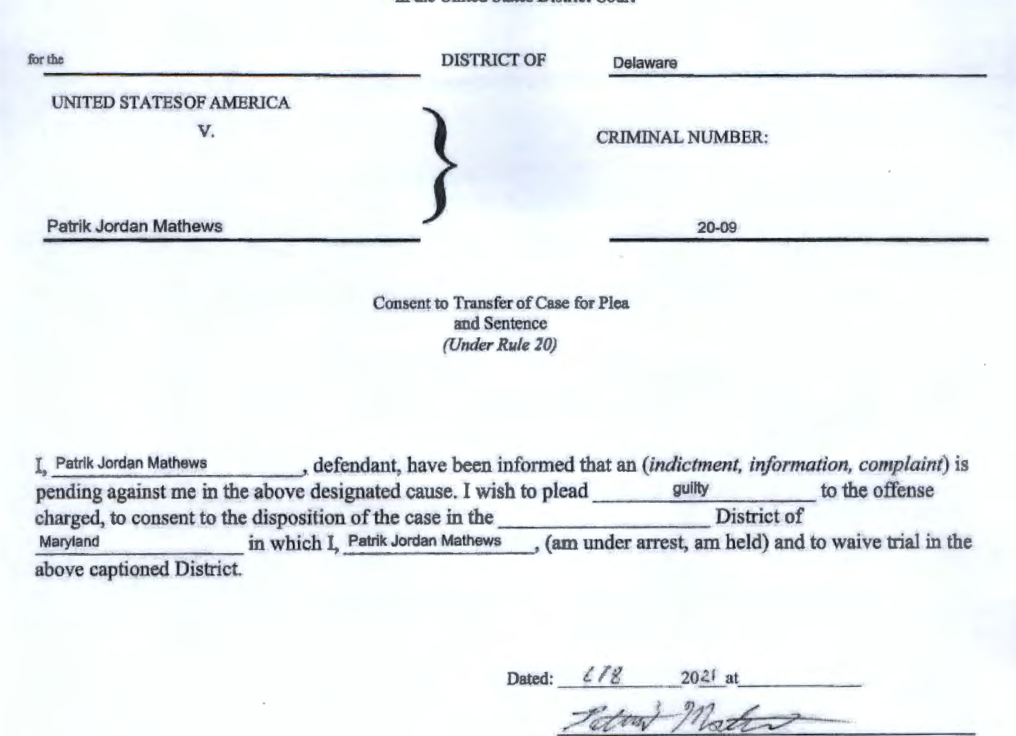 In August 2019, after police began investigating Mathews’ connections to The Base after a bombshell feature in the Winnipeg Free Press exposed his activities inside the group, Mathews disappeared. The only trace of him was his car, left near the Canada-U.S. border between Manitoba and Minnesota. Days after his illegal crossing, Lemley and Billborough met Mathews and drove him to Delaware where he was harbored by the group for nearly five months in an apartment owned by Lemley, which VICE News revealed a month before he was eventually arrested.

During that time, the three plotted an attack on a pro-gun demonstration that was scheduled to be held in Richmond, Virginia in January 2020. The plan, which also involved derailing local trains, centered on opening fire on the marching crowd from the rooftops near the state Capitol hoping to sow confusion in the crowd and force armed protesters to exchange fire with police. The potential carnage, in the minds of Lemley and Mathews, would spark a race-war and energize the white supremacist movement in the U.S. to revolt against the government. But before they could enact the plot, the FBI raided their apartment in January 2020, only days before the rally, arresting all three men in advance of the planned terror attack.

Mathews was a trained combat engineer and reservist in the Canadian Armed Forces (CAF), which has a well documented problem with far-right infiltrators. He was booted from the military shortly after his ties to The Base came to light. But Mathews didn’t let his soldiering skills go to waste and trained fellow members of the terror group in various paramilitary tactics at an October 2019 training camp in Georgia where he helped behead a ram and allegedly dropped acid with other members of the group. Little did The Base know, an FBI undercover agent was in attendance at the camp under an alias and logged all of the crimes, which was then used to lay charges on Mathews and several others.