In the midst of his election campaign, Liberal Leader Justin Trudeau told off a man who reportedly called his wife a derogatory slur.

The heckler was outside Global News’ station in Burnaby, British Columbia, where Trudeau was preparing to be interviewed by anchor Neetu Garcha.

Video footage posted by Global News shows Trudeau and Garcha standing as a man’s voice off camera yells, “Where’s your wife? I heard she’s a (expletive).” Multiple journalists said the word was a sexist slur.

A video posted by CBC News shows the man telling Trudeau, “I’m right here… You fucking chicken shit.” The man also appears to say, “Come on buddy, come vaccinate me” and gestures at his arm.

Trudeau pulls down his mask and asks, “Isn’t there a hospital you should be going to bother right now?” 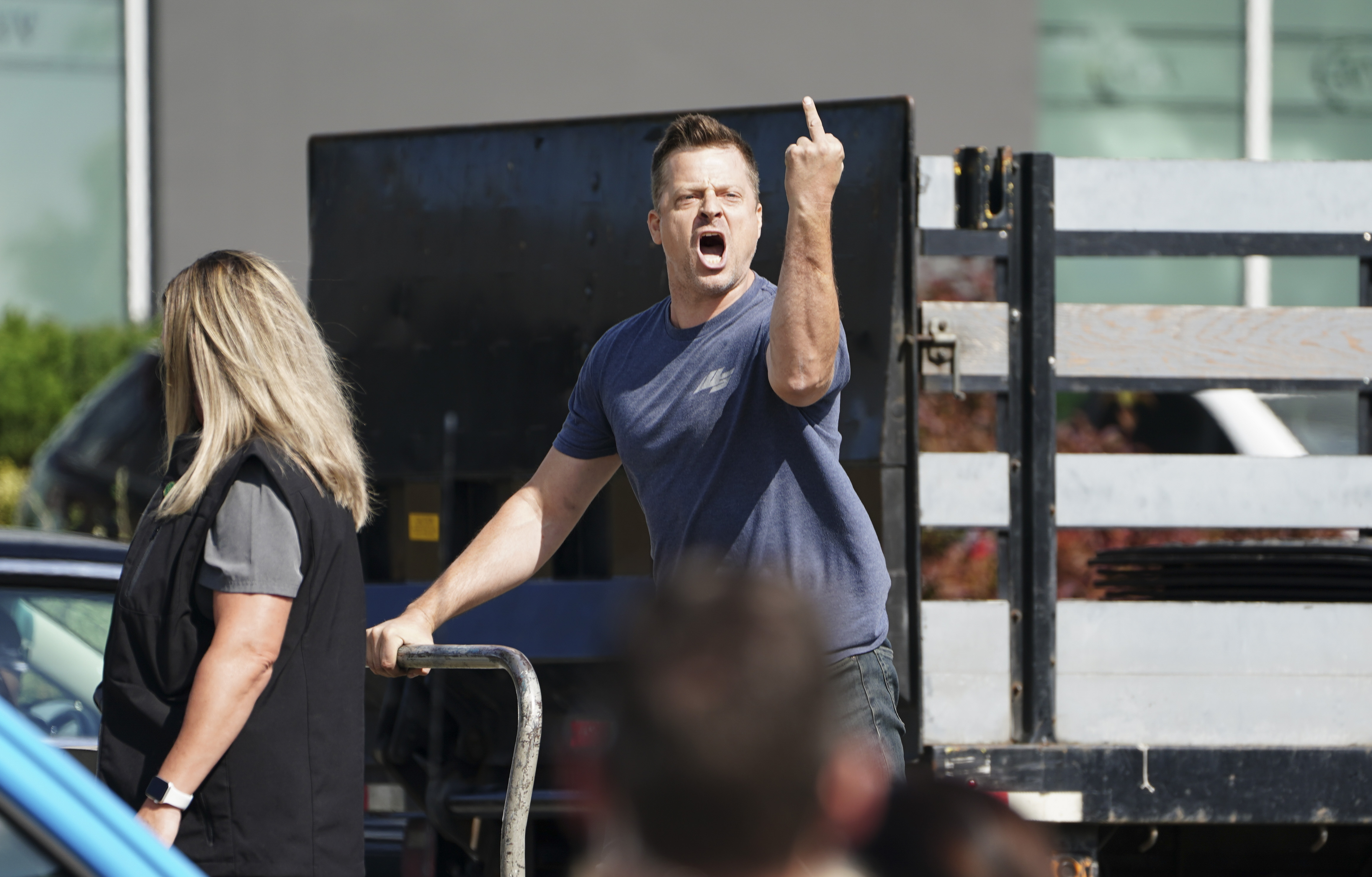 A lone protester heckles Liberal leader Justin Trudeau as he takes part in an interview with Global reporter Neetu Garcha in Burnaby, B.C., on Monday, Sept. 13, 2021. Image via The Canadian Press

The incident came as anti-vaxxers organized coordinated protests at hospitals across the country. Anti-vaxxers have plagued Trudeau’s campaign stops in particular, throwing gravel at him and causing one of his appearances to shut down due to security concerns. The anti-vaccine organizers of Monday’s nationwide hospital protests said they are taking a “break” due to the “hate” they are receiving. Trudeau also promised Monday to create new laws to crack down on hospital disruptions.

After responding to the heckler, Trudeau sat down with Garcha for an interview in which she intensely grilled him on his record on reconciliation, Quebec’s Bill 21, and feminism. Trudeau seemed frustrated at various points during the interview, as Garcha repeatedly asked questions about his record, leaving the Liberal leader asking why he did not get a chance to talk about climate change and the pandemic response, two key planks of his campaign.

Garcha said Trudeau has failed to make reconciliation a priority in the campaign. She asked when he will meet with Chief Rosanne Casimir of Tk'emlups te Secwepemc Nation, where the unmarked graves of more than 200 children were found at a former residential school site.

On racism and Bill 21

Garcha asked Trudeau about whether he feels Quebec’s Bill 21, which forbids public servants from wearing religious clothing on the job, is discriminatory.

“I think we need to respect people’s freedom of choice, freedom of expression, freedom of religion. The Quebec government passed this bill, and I am the only party leader who has said that I am not taking off the table the possibility of weighing in as it moves forward in the courts,” Trudeau replied.

But pressed by Garcha on whether or not the bill is discriminatory—a term he used to describe it in 2019—Trudeau repeated he doesn’t agree with the bill, which is largely popular in vote-rich Quebec.

Trudeau famously achieved gender parity in his 2015 cabinet, responding “because it’s 2015,” when he was asked about it at the time. But he’s since had a number of falling outs with high profile women in the party, including former justice minister and attorney general Jody Wilson-Raybould and former health minister Jane Philpott.

“You relied on support from women and minorities in order to get elected multiple times,” Garcha said. “Now, those groups aren’t having the same reaction to you. Some women are claiming that you’re not truly a feminist. That’s just part of your brand. Given all that’s happened under your watch over the last six years and you’ve said it weighs on you, can you really sit here right now, today, and still call yourself a feminist?”

Trudeau replied that he is a feminist and he relied on “extraordinary women across the country to deliver big things for Canadians,” including Wilson-Raybould, whom he kicked out of the Liberal caucus following the SNC-Lavalin scandal.

After wrapping up a segment on Afghanistan, Garcha thanked Trudeau for his time, which seemed to take him by surprise.

“We have run the debate. We have run major news conferences that you have held throughout the campaign. Our colleagues across the country have asked for opportunities to interview you and ask a range of topics, and you’ve denied their request,” she continued.

Trudeau then interjected and said, “Wow. Well listen, I’m excited to talk to British Columbians about climate change and about ending this pandemic for good and about the important choice B.C.ers and all Canadians need to make on how we move forward.”

The Canadian election is Sept. 20. Polls show the Liberals, who held a minority government prior to the snap election call, to be neck in neck with the Conservatives.