ABBOTSFORD, British Columbia — The first time Carrie smoked “down,” a street name for fentanyl, heroin, and other illegal opioids, she said she was held captive for four days inside a tent by a much older man who’d given it to her.

Either 13 or 14 at the time, Carrie, now 17, said the man, who was in his mid-20s, told her he was giving her “shatter,” a weed extract. She’d met him in passing at a local park where she knew people smoked weed.

“I smoked it and instantly I was fucking throwing up all over everywhere, and I just couldn't move for four days,” said Carrie. (VICE News is only using her first name to protect her privacy.) She said the man hid her cellphone and her belongings in a bag in the dirt outside the tent in Abbotsford, a city about an hour’s drive from Vancouver. It wasn’t until he was “nodded out,” when opioid users appear to lose consciousness, that she managed to recover her phone, grab her things, and escape—in bare feet in the middle of the night.

But she wanted more of the dope. “It was only five days of smoking and I was already fucking addicted,” she said.

Weeks later, she said the same man gave her pink dope that caused her to overdose for the first time. To this day, Carrie said she doesn’t know exactly what was in it, but she suspects it was heroin, fentanyl, or benzo dope—a dangerous cocktail of illicit fentanyl and benzodiazepines, or sedatives.

As the drug supply in North America moves farther away from substances that came from plants, like heroin, which is made from poppies, and more toward highly potent synthetic drugs like fentanyl and benzo dope, teenage drug deaths are skyrocketing. And it’s not because more teens are using drugs; in the U.S., adolescents reported the lowest rates of drug use in years. But the drugs are so potent now that what may once have been considered harmless experimentation can kill you.

In Canada, the number of fatal overdoses among people 15 to 19 years old tripled from 25 in 2011 to 75 in 2020. Benzodiazepines were found in a third of fatal overdoses in British Columbia in March. In the U.S., a study published last month in the Journal of the American Medical Association found that teen overdose rates doubled from 2019 to 2020, from 492 to 954 deaths, and went up another 20 percent in the first half of last year, despite self-reported teen drug use rates declining in 2021,

Study author Joseph Friedman, an addictions researcher at the University of California, Los Angeles, said the increase is due to the prevalence of illicit fentanyl, which was linked to 77 percent of teen overdose deaths from January to June 2021. In some cases, teens died after taking pills they didn’t realize contained fentanyl.

Friedman said teens are an easier group to intervene with because they’re often just experimenting. These days, however, that experimentation can be fatal, particularly with the proliferation of counterfeit pills containing fentanyl.

“If we don't intervene in a meaningful and profound and structural way… the most likely outcome is that teen overdose death rates are going to continue to go up,” Friedman said.

“It was only five days of smoking and I was already fucking addicted.”

Carrie was officially introduced to benzo dope by her ex-boyfriend two years ago and now she’s addicted. She said she can’t remember how many times she’s overdosed. But without the drugs, she goes into severe withdrawal, from both the benzos and the opioids.

Benzo dope has been linked to reports of physical and sexual assault, robberies, and car crashes because people are asleep for so long. It’s also causing people to experience more severe withdrawal and overdoses. That’s partly because naloxone, used to revive people from opioid overdoses, cannot reverse a benzo overdose.

Carrie described two occasions in which men gave her drugs and she later woke up without her clothes on. She did not know whether she’d been sexually assaulted.

“I figured out there’s something wrong with the dope when I was given one hoot and I woke up the next morning with my pants around my ankles and shoes,” she said. “I realized if I was raped and I didn't wake up, not through any of it… I should’ve woken up, especially if it was normal dope.”

Danya Fast, a research scientist at the BC Centre on Substance Use and assistant professor at the University of British Columbia, has been working with young drug users since 2008. She said women and queer people who use drugs are at heightened risk for assaults, but young people are uniquely vulnerable because of their size, financial insecurity, and the fact that they may not have networks set up with people who can protect them.

“Some of the worst situations I’ve seen in terms of sexual violence have happened to younger folks,” she said.

Fast said it’s common for young people to tell her they started using drugs at age 12 or 13, often for recreation but also to deal with physical, emotional, psychological, and even economic pain.

She said there are interesting social dynamics that develop when people start using drugs at a young age. Most of the young people she works with are not in touch with their families. But they don’t have solid networks, and they’re sometimes shunned by older drug users, creating more isolation.

“They’re trying to discourage them from going down a path that has possibly brought them a lot of pain and a lot of suffering,” Fast said. But it can have the opposite effect, forcing young people to use drugs alone, where they’re at greater risk of overdosing.

Carrie said she has a strained relationship with her family, and left her mom’s house after she was given an ultimatum between abstinence and leaving. Two of her siblings are also addicted to drugs, including benzo dope.

When VICE News met Carrie, she was at the home of Keisha, an Abbotsford-based fentanyl dealer who provides her with food, a place to stay, and free fentanyl that doesn’t contain benzos. Keisha asked VICE News not to use her last name. 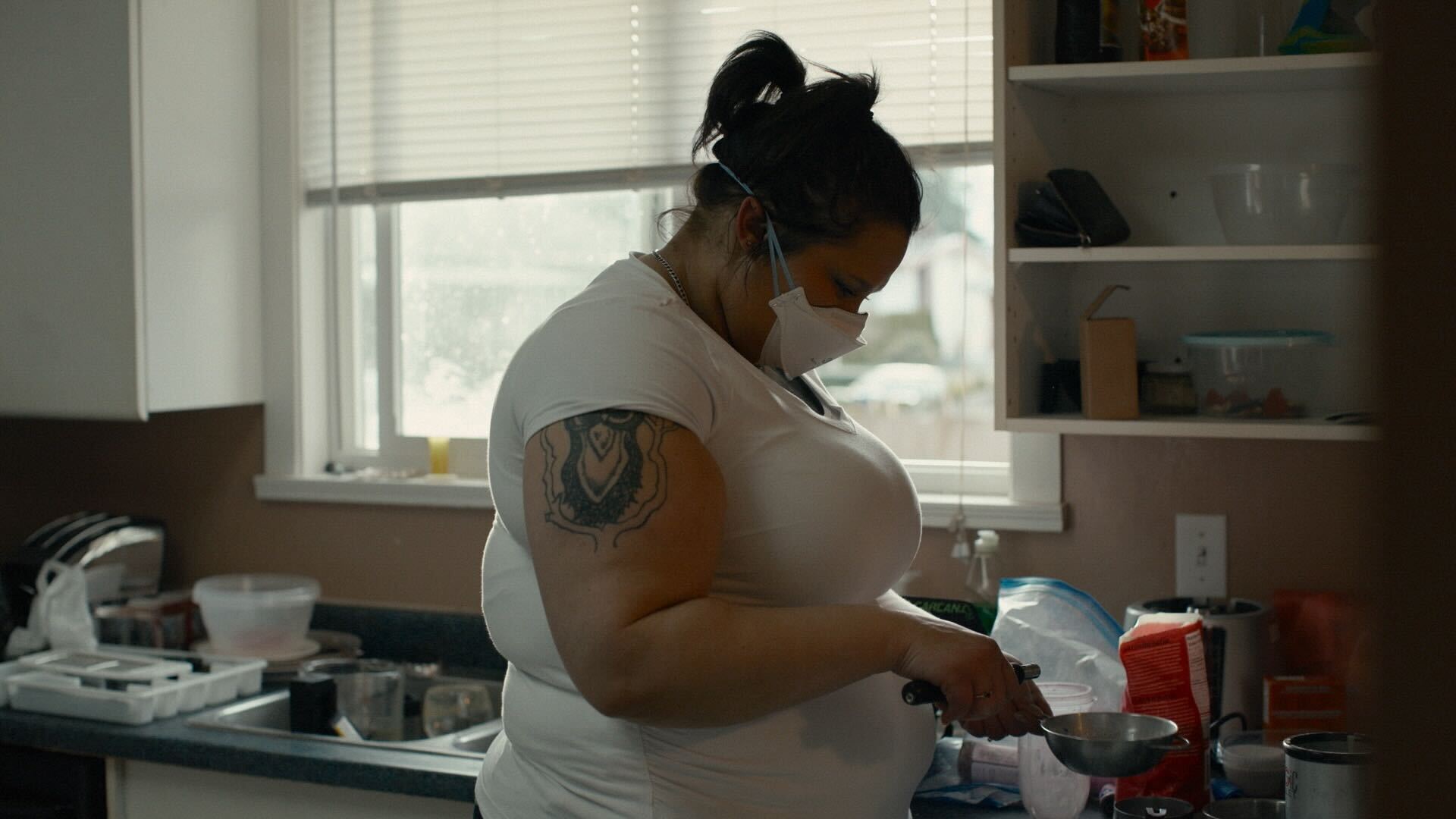 Keisha, 33, who started using and selling heroin as a teenager, said her stance on minors has evolved over the years. She used to refuse to interact with them. Now, while she doesn’t sell drugs to anyone underage, she believes it’s safer for young people to use drugs under her supervision, especially if they can’t find support.

“Who am I to say that it’s wrong for them to do drugs?” she said. “I'd rather them be under my roof and do it safely and not have to go turn tricks at a hotel to get dope.”

But Carrie’s father doesn’t see Keisha as being any different from any other dealer.

Experts say addressing teen drug deaths will require giving teens practical information about drugs and access to naloxone and fentanyl test strips, and moving away from abstinence-only and punishment-based approaches.

“Instead of telling teens not to do drugs and just focusing on how dangerous drugs are, we really have to give them accurate information about the relative risk of different things,” Friedman said. “We're definitely talking about a paradigm shift.”

However, he said it’s still best for young people to postpone experimenting with drugs because it makes it less likely that they’ll develop a substance use disorder.

In B.C., young people with addictions can use safe drug consumption sites, but Fast said many don’t because they don’t feel welcome.

She recently authored a paper alongside a group of young people who use drugs, presenting radical solutions for addressing the issue, including safe drug consumption sites tailored to their demographic.

“Stop pathologizing [young people who use drugs] and trying to ‘save’ or ‘fix’ us,” said the paper, published in Harm Reduction Journal. “Recognize that we have the human right to make decisions for ourselves and keep ourselves safe.”

The paper also called for increased access to medication-based treatments for opioid addiction, such as methadone and buprenorphine.

While teens living in B.C. can technically access safe supply—pharmaceutical alternatives to street drugs, like prescription heroin—a lot of doctors aren’t on board, according to Bohdan Nosyk, an associate professor in the faculty of health sciences at Simon Fraser University.

Nosyk said retention rates in treatment programs are on a 12-year decline, in part because the street drugs are so potent, medically administered drugs aren’t keeping people’s withdrawal at bay.

“Our treatment system is far too restrictive. It's too hard for people to stick,” he said.

“We still don't have a handle on this, and B.C. is doing more and spending more than everywhere.”

There are also structural issues that need to be addressed. U.S data shows overdose rates are disproportionately affecting Native American and Latino teens.

Dr. Helena Hansen, a fellow researcher at UCLA who co-authored the paper with Friedman, said in addition to decriminalizing drugs and implementing safe supply programs, people in communities traditionally harmed by the war on drugs need access to better social supports, access to medication, and housing.

“Let’s look at how we can foster economic development in neighborhoods that have really suffered,” she said.

Carrie’s not putting pressure on herself to get sober right away, and she advises other young people to avoid convincing themselves they’ll never be in her position.

“It doesn’t matter if you think you’re never gonna touch drugs and you’re just gonna stay away from that crowd. Anything could happen that loops you in because you don’t know what an addictive personality you have until you get addicted to something,” she said.

Eventually, she said she’d like to graduate from high school and “make money legally.”

For now, she is focused on dealing with her suicidal thoughts and self-harm.

“When I learn how to get over my issues with that, I’m gonna focus just on getting sober,” she said. “I just want to share my story to prevent a lot of other girls from either going through that or girls who have experienced it, so they know they’re not alone and they can get through it.”