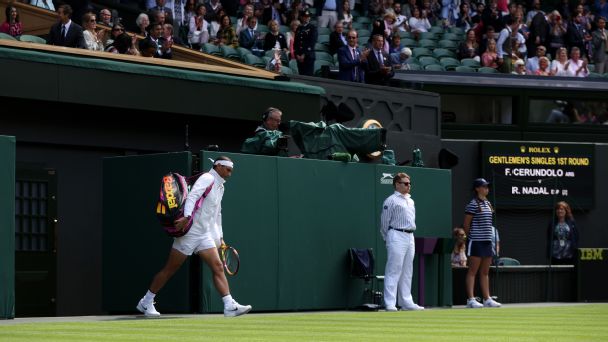 LONDON — The Wimbledon experience is anchored in tradition.

The players wearing all white, the reigning men’s champion opening play on Monday, the strawberries and cream and camping out for tickets in the “queue” … all time-honored experiences. Then there are the other staples: The crowd applauding politely whenever the umpire tells someone to switch off their phone, and that inevitable comedian trying to raise a laugh by shouting “Come on Tim!”, the popular chant among fans that’s endured more than a decade.

This year’s Wimbledon has all the trademarks of the 154-year-old tournament: the white, green and purple flowers and the familiarity of the whole experience.

“It’s just the attention to detail in every single aspect that this place has,” Emma Raducanu said pre-tournament. “I mean, from the flowers to everything. They have, like, subtle hints of tennis racquets and tennis balls in the carpets. The level they go to to make sure this place is pretty much perfect. It’s pretty outstanding.”

Ons Jabeur said Wimbledon feels like “a wedding, everybody in white, or a beach party.”

John Isner also loves it here: “You know, they do an amazing job of manicuring the grounds, and every little flower that’s cut is just done to perfection. It’s a really cool thing. Even if you are not a tennis fan, this is something that should be on your bucket list to see if you are a sports fan. It’s amazing here.”

The middle Sunday of the previous 13-day tournament used to be empty to either provide players a valuable rest day, or to allow the schedule to catch up if there were rain delays. This was used on four occasions: in 1991, 1997, 2004 and 2016.

But the decision to scrap the rest day was made back in April 2021, which brings it in line with all three other Grand Slams and makes it a 14-day event. There are obviously commercial benefits for the All England Lawn Tennis & Croquet Club by having one extra day’s play, and the call was also welcomed by Novak Djokovic.

“All the other Grand Slams are playing in mid Sunday,” Djokovic said. “I’m glad that Wimbledon has introduced that, as well. I’m in favor of that rule change. I like the middle Sunday play.”

That rest day also gave the grass a chance to recover, but the AELTC is confident it can withstand 14 straight days of bombardment.

“Thanks to improved grass-court maintenance technology over the past five years or so and other measures, we are now confident that we will be able to look after the courts, most particularly Centre Court, without a full day of rest during the fortnight,” AELTC chairman Ian Hewitt said.

“This provides us with an opportunity at an important time to make this move. We consider it’s in the best interests of tennis fans and the sport that Wimbledon should be able to be watched and attended throughout that middle weekend.”

The old tradition saw players wait in the clubhouse underneath the Royal Box at Wimbledon and walk onto Centre Court behind the green screen, snaking along to the left and then out onto the grass.

They’ve changed that this year. The players walk out through hinged doors in the green canvas screen. The organizers say it creates “the impression of a magic portal through which the world’s most skilled players are transported for public appreciation.” It’s been dubbed the “central reveal”, meaning players no longer have the opportunity to “inhale deeply” before entering court.

Raducanu played on Centre Court for the first time in her career Monday. Before she walked out she “wasn’t really sure” about how the new process worked, but said “anytime you’re walking out onto Centre Court, it’s going to be cool.”

It didn’t go to plan for Karolina Pliskova, who was first out ahead of Katie Boulter on Thursday, only to turn left, before Boulter reminded her of the new entry point.

That’s not the only shift on Centre Court, which celebrates its 100th birthday on Sunday. The umpire chair is a new green and gold structure, changed to “accommodate the required technology and broadcast equipment in a considered and discreet manner whilst detailing a bespoke piece of joinery that encompasses some of the construction details of the original wooden tennis racquets,” according to the club.

For the first time in its history, the club allowed players to practice on Centre Court in the week building up to the opening Monday.

Rafael Nadal and Matteo Berrettini were first on June 23. This allowed players to adapt to the grass after some slipped last year, including Serena Williams, who injured her hamstring and was forced to retire.

Williams was pleased to be allowed to test her footing prior to the start of the tournament.

“You know, in one hand it’s amazing, but on the other hand it’s like, we have to preserve Centre Court,” she said.

“Obviously I was super happy to be out there and have that opportunity, and it was also good for me to, like, get that out of my system because the last moment I had on Centre Court was probably not my best moment.”

But Djokovic was not such a fan of the call.

The change follows the AELTC’s decision in 2007 to award equal prize money. Then in 2021, players were given identical towels, instead of the previous approach where men and women would receive different colored ones.

The #Wimbledon honor board for the women’s competition is looking great, following the decision to stop listing women champions as “Miss” or “Mrs.”

While the all-white policy will likely never change, Wimbledon did allow a splash of colour this year for those wanting to show support to Ukraine.

Iga Swiatek has worn a blue and yellow ribbon on her cap just like she did at Roland Garros, while Ukrainians Lesia Tsurenko and Anhelina Kalinina were both permitted to show their support for those suffering in their home country following Russia’s invasion back in February.

Tsurenko wore a blue and yellow ribbon on her top, while Kalinina attached one to her bag.

“I asked, and the answer was, yes, we can wear it,” Tsurenko explained.

The main traditions remain in the preserved tennis haven. The men’s champion will open Monday on Centre Court, and the women’s champion will start Tuesday play in the famous stadium. The strawberries and cream are still part of the tournament’s DNA.

The one staple still under scrutiny, though, is the all-white clothing rule. Ex-player Monica Puig has called for a shift in this policy to prevent the mental stress for those who are on their periods while at Wimbledon.

Definitely something that affects female athletes! Finally bringing it to everyone’s attention! Not to mention the mental stress of having to wear all white at Wimbledon and praying not to have your period during those two weeks. https://t.co/PzyHnPlSJk

Other players have mixed emotions on the subject.

Petra Kvitova was asked about whether she was concerned by the dress code, and answered: “Yeah, I know it’s not really comfortable for girl playing in white when they have periods. On the other hand I think that we can manage it somehow, as well. We do have lot of options about it, as well. Yeah, it’s very unusual that you get it, like, during the match. It’s can happen, of course. I think still Wimbledon, it’s white and it just should be white.”

Heather Watson said to the BBC it is an issue “players talk about around Wimbledon because of the all-whites.” She added: “I think people speak about it a lot — maybe not to the media but among ourselves, for sure.”

Simona Halep‘s view is that she “loves all white here.”

“I feel like this also makes this tournament special,” Halep added. “So hundred percent for all white here.”

So, will the Wimbledon we know so well look completely different in a few years’ time? Unlikely, but more thoughtful changes have been implement that show a greater awareness than in the past. While some aspects shift to keep up with the changing times, others will stay the same.

“Things are changing, which is good that the tournament and the club is open to certain changes and I guess adjustments, depending on the needs of players or fans or the time, the society that is following,” Djokovic said.

“But I still respect and love Wimbledon for keeping its tradition of all white. Also no advertisement on the Centre Court. I think that’s something that in today’s world is really rare. I mean, after surprising changes this year, you don’t know. Anything can change in the future. But we all know for sure that Wimbledon sticks to its tradition and very carefully looks at any changes if they make any.”