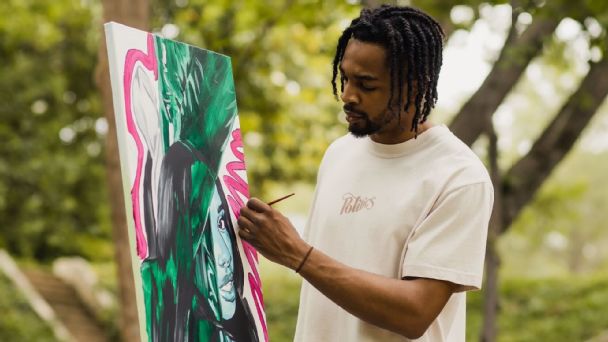 You might see that he’s appeared in 10 games over the past two seasons and registered two tackles and say that’s a stretch, but it’s not. Ra — as he’s often referred to by his teammates, friends and family — has talents that go beyond the football field.

He’s a gifted artist, and last July 1 — with the loosening of restrictions on college athletes making money through their name, image and likeness — Kazadi’s world as an artist opened up considerably.

“It’s funny because it’s been less about money now. It’s been more about just working and growing, and just trying things.”

Kazadi sold his work before NIL restrictions were lifted, but couldn’t put his name on it, have shows or promote his art on his Instagram or website.

“It was just basically relying on people to know that I was an artist and then doing stuff for super cheap,” Kazadi said. Because of these limitations, he said he wasn’t able to sell pieces for much — $30 for a sketch, and maybe around $100 for a painting if he was lucky.

“It wasn’t at the scale, even close to what it was now,” he said.

Kazadi said he’s able to get higher prices for his work now because people know it is his and he’s able to promote it. The greater financial freedom has given him more time to experiment with his art and continue to improve at his craft.

“I’m able to grow as an artist and then explore other stuff,” he said. “If I’m like, ‘Oh, it’d be cool to paint on some pants, or be cool to paint on a T-shirt,’ I can explore different executions. I can do a mural because now I’m not like, ‘Oh, wow, I only have $300 for food, gas and everything for this month. Let me try and go get a painting [done for money] real quick.’ So it’s good.”

Kazadi can’t remember a time when he wasn’t into art. He started out drawing superheroes when he was in kindergarten (Wolverine was his first), and his passion continued to grow from there.

“My art got a little bit more complicated, and [my art] got sophisticated,” Kazadi said. “It started to be like, ‘OK, what do I want to say? What am I trying to say? What do I want people to see?’ Instead of just copying stuff, which was good for things like anatomy and stuff like that. But as I matured, my art did.”

For those who know Kazadi best, his work ethic and passion are his defining traits. They show up in everything that he does from football to art to his work for the nonprofit of which he is a founding member, The Detente Collective, which has a mission of addressing community needs “to foster economic, educational, social and personal growth.”

“It’d be easy for a guy not to put in that work when they’re not necessarily playing 70 snaps on Saturday,” former SMU safeties coach Trey Haverty said. “But he does, and he’s improved more than anybody from the day we got here four years ago to where we’re at now.”

Fellow Mustangs defensive back Brandon Crossley said, “His work ethic for football is like — what y’all see in the art is literally what we see on the field. All the way from offseason to the end of the season. There hasn’t been a day where Ra didn’t give 110 percent.

Here are some examples of Kazadi’s work, with descriptions in his own words.

“THIS WAS 2020, and I think this was when I first started painting a whole lot. I had always been super interested in Hellenistic statues, like the Greek statues, Alexander the Great. Whatever it was, I was just kind of interested in that era.

“And I’ve always been really interested in colors. So when I saw [Boxer at Rest], I was a little bit interested, because they didn’t really know who made it. That was one of the things I saw where it was kind of like a jumbled history. So because the history is confusing, I like purple because to me, it represents almost a confusion between like, a red or blue or just like finding yourself.

“I just really liked that I couldn’t tell if he was defeated or if he was excited that he won and just kind of taking a step back. And I just kind of related to that because you never really know if you win. Because I feel like sometimes things are more tough than you imagined and just kind of relating that back to COVID. It’s like, OK, you don’t get COVID, but you’re stuck in the house. Or you got COVID, you’re still stuck in the house. So it kind of just reflected my confusion over time.”

“This one I kind of wanted to just come off as playful. And like the boots, I thought were a cool way to kind of show that — they’re almost like walking away. And, I don’t know, just like ‘What is it all about?’ Honestly, I was just really trying to make something that was aesthetically pleasing, that was a little bit interesting where you kind of want to know more about it. Because honestly that’s kind of how — if you’re out and you see a really pretty girl, you want to know more about them, so that’s kind of what I was trying to portray with the piece.

“And also, I was really listening to Freddie Gibbs’ ‘Something to Rap About’ and that kind of influenced the piece, so ‘Something to Paint About.'”

“SOMEONE CAME TO me and they were like, ‘Hey, I want a Muhammad Ali piece.’ I found a few photos to choose from. But the color scheme was completely up to me and everything. For the blue, I wanted something that felt old, but was still kind of like a vibrant, contemporary type color. And I wanted the background to kind of reflect that. I wanted the background to reflect a moment and instead of a moment in time, like a moment of feeling.

“I think this was right after he beat … Sonny Liston. So obviously a moment of victory, he’s excited. I just really tried to say, ‘Hey, this is something old but timeless.’ That’s what he is. He’s the greatest ever. And he’s always gonna be called the greatest ever. You can’t get rid of that title. So it’s an old, timeless title. And I feel like a painting should definitely reflect that.”

“So Duck [Donald Clay], he’s from Louisiana. He lives and breathes Louisiana. He’s always talking about Mardi Gras. He’s always talking about Bourbon [Street]. He’s like, ‘Yo, you gotta make it to the city,’ whatever. So just talking to him and just figuring out exactly where he’s from, the places he went and the significance of certain events. So for him we talked about Mardi Gras a little bit more, so I put a mask in that left corner. At the bottom is Bourbon Street because that’s where he’s from.

“And his trials and tribulations of moments of victory with SMU football — he had it tough for a second, but he’s really finding his own way of doing things. And I just want to kind of give him a chance to say that without saying that.”

“RASHEE RICE, HE’S from Dallas. So again, chronologically explaining his story from the bottom left. So he’s from Dallas and Philly, so you’ve got the Dallas skyline to the right, and you’ve got the Philly skyline to the left. And just what he did to get to SMU football, and Rashee’s a pretty smiley guy. So I really wanted to capture something that showed his whole emotion and just who he is besides this intense kind of athlete, because that’s how most people know him. But he’s a fun dude. He likes to have fun. So I wanted to portray that and just give him a chance, talking about himself and his story a little bit more.”

“THIS IS A lot of people’s favorites — also one of my favorites. So, it’s a little sappy, but just kind of like getting into my first kind of serious relationship in college. It kind of shook me, wasn’t really ready for it, whatever. The reason it’s called ‘Caught on Fire’ is because I was reading this quote and it says, ‘Love is friendship caught on fire.’ We were really close friends, honestly, in the beginning of it so, you know, just ended up that way.

“But I wanted to tell the story of someone getting ready for a date, and then as the date progresses, things happen. And you guys end up getting intimate with the ‘smack,’ just like the sound of kissing. And then a nod to the ‘Caught on Fire’ if you’re looking at it in the right-hand corner in the black and white. And the top, ‘In My Room’ [by] Frank Ocean, I was listening to some of that. And he was really just talking, and I liked the vibe. So I tried to solve the visual problem of putting what he’s trying to do sonically with the layers and kind of what he was doing on a canvas and with a paper.

“It was a fun type project to try and do. But just picking a color scheme, trying to stay consistent with the colors, trying to say like, vibrant, almost like you know when you get that nervous feeling but you’re excited at the same time. It’s really in your face. So that’s what I wanted the piece to feel like. And I love vintage comics, so straight up took a bunch of inspiration from that. And this was one of my first comic book pieces. So this honestly was — and I hate saying this — the first time I ever do something, it’s the best time I can ever replicate it. ‘Cause it’s just being in the moment — not even being like, ‘Oh, this would be cool if I put this here. Let’s mess with it.’ And then you mess with it so much that you’re like, ‘Oh my god, I like it.’ Because it’s just like … flow. It’s just like when you’re playing, like you’re just in a flow state. You get in these moments where you just can’t make a mistake.”