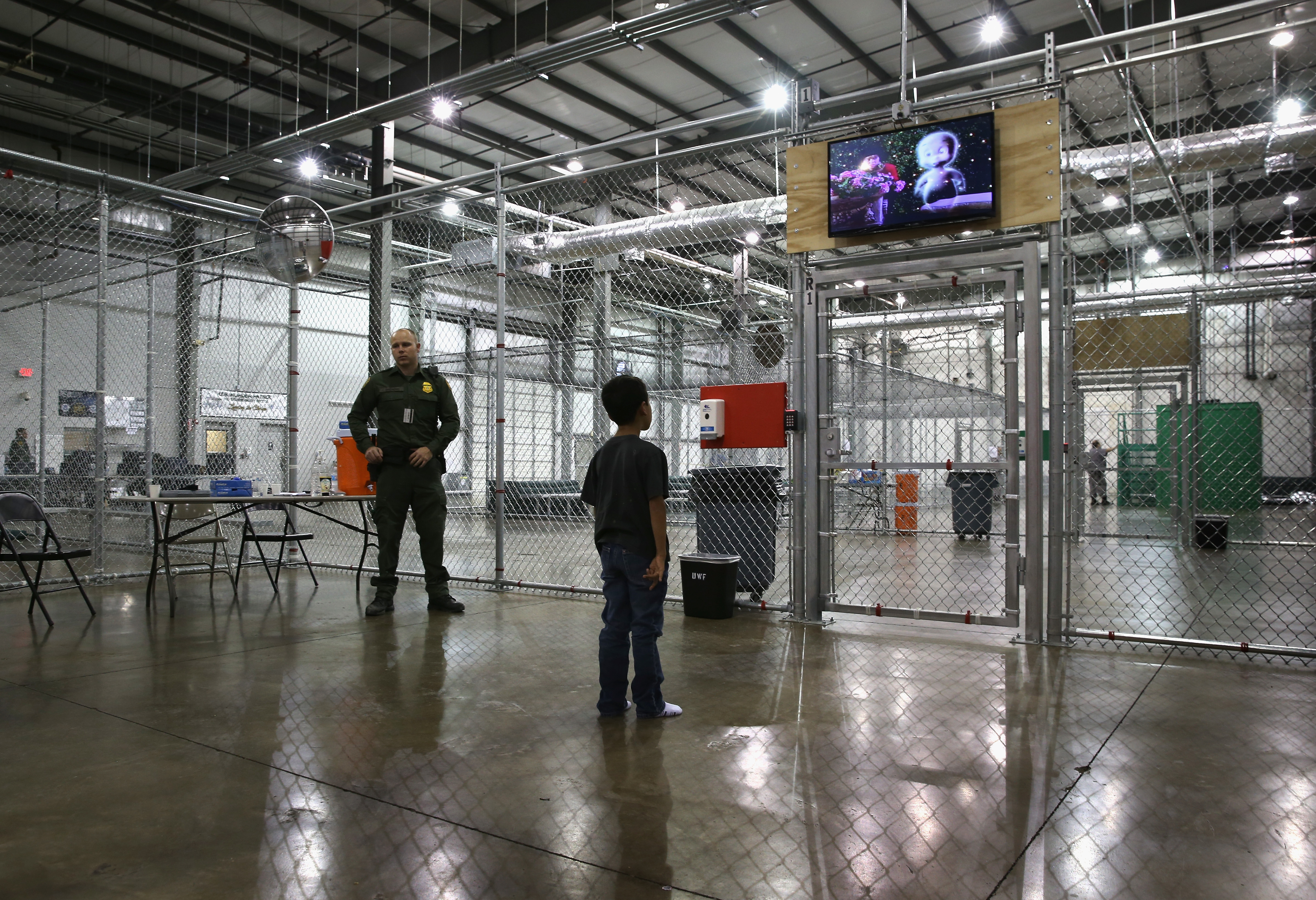 On Sunday, US Senator Jeff Merkley of Oregon tried to visit a detention facility for migrant children in Brownsville, Texas. It did not go well. In a video streamed to Facebook, which has now been viewed almost two million times, Merkley detailed his frustrated efforts to gain access to the building—a repurposed Walmart—after being denied access multiple times by staff.

The Senator had a simple question: What was going on inside the building—and where were the children?

That same weekend, Merkley—a liberal Democrat—made another trip to a similar facility called the McAllen Border Patrol Processing Center, where he said he saw children being kept in cages, much like in a series of photos from 2014 that recently spread across the internet.

“[T]hey have big cages made out of fencing and wire and nets stretched across the top of them so people can’t climb out of them,” Merkley said. “Every time I probed yesterday on the circumstances, the response was just basically a generic, ‘That is what’s required for security, this is what is required for control.’”

The trip came after an exceptionally draconian new set of policies were put into place by Jeff Sessions and the Trump administration, in which children are being purposefully separated from their parents at the border as a means of deterring others who might try to cross over. “If you don’t want your child separated, then don’t bring them across the border illegally,” Sessions said back in May when the new zero tolerance policy for any adult trying to cross the border was announced.

The facility in Brownsville Merkley tried to enter is run by a company called Southwest Key, which has dozens of facilities across the country that bring in tens of millions of dollars in federal grants to operate every year by subcontracting for the Office of Refugee Resettlement under the Department of Health and Human Services (HHS). Although they’re a nonprofit, the leaders of the company are paid an exorbitant salary — president and CEO Juan Sanchez received $770,860 in compensation in 2015, a nice bump from the year prior. Nonetheless, they insist, their efforts are all aimed at the best interests of the children.

“At Southwest Key Programs, we share Senator Merkley’s concern for children, and we appreciate that he took time to travel to the border,” the company said in a statement. “For more than 20 years, Southwest Key has acted as a humanitarian first responder, caring for immigrant children arriving in this country without a parent or guardian. We provide round-the-clock services including: food, shelter, medical and mental health care, clothing, educational support, supervision, and reunification support.”

That may be the case. The problem is, as Merkley’s visit showed, very few people outside of the company have been able to gain access to what goes on inside. Of the dozen immigration aid and legal groups I contacted, most indicated they had ever been allowed into one of these detention centers. (In a statement, a spokesperson for the HHS Administration for Children and Families said Merkley “attempted to enter an unaccompanied alien children’s (UAC) shelter unannounced and broadcast live via social media last night in Texas. Thankfully for the safety, security and dignity of the children being cared for there, they were denied access. The Department of Health and Human Services takes the legal mandate to care for these children seriously. No one who arrives unannounced at one of our shelters demanding access to the children in our care will be permitted, even those claiming to be US senators.”)

One person who has made it inside places like this, albeit not the Brownsville location, is Rochelle Garza, an immigration attorney in the area who represented the 17-year-old known as Jane Doe last year in a high-profile case where the government refused to allow her to leave her detention facility to have an abortion. (She was eventually allowed to do so, though the Supreme Court ultimately threw out the precedent in question.)

I spoke with Garza about the frustrations of trying to represent children who have been taken from their parents at the border, and why she thinks the new policies under the Trump administration are only making things worse.

VICE: What has traditionally been done with unaccompanied migrant children?
Rochelle Garza: First, some context: The Trafficking Victims Protection Reauthorization Act of 2013 and the Flores Settlement Agreement are the two pieces of law that control the treatment of unaccompanied minor children. These are children typically from Central America’s northern triangle. Any child that presents themselves or is found in the US without a parent is an unaccompanied minor. You don’t usually see Mexican children, as they’re usually returned back to Mexico, unlike Central American children. Those are the ones in facilities like this one, a lot of times fleeing violence in Honduras or El Salvador, coming here and trying to find a parent or someone else here.

Much of this has been going on for a while, including under Obama. What is different now?
The family separation issue is new. Children are being taken from their parents and being made into an unaccompanied minor. That is under the new policy Jeff Sessions announced in May. It’s a crisis of sorts and it’s self imposed. We’re separating parents from kids and the kids are flooding the Office of Refugee Resettlement. The parents are being persecuted and funneled through the immigration system. That’s the context we’re talking about.

The Brownsville facility has a capacity for 1200 to 1500 people. The last I heard there were 1200 in that facility alone. At one point there were about 20 facilities in the Rio Grande Valley here in south Texas.

Do the children have any sense of what’s happening to them?
That’s part of the big picture. When a child comes into the Office of Refugee Resettlement, they’re provided with a know your rights presentation. There are legal service providers located anywhere there’s a facility. They explain to them they’re in removal proceedings and what their rights are. They explain a little of the court system and what to expect. But no child is expected to understand. They’re children and they’re explaining things in another language to them. We have to contextualize this all that way. They’re given a legal screening and evaluated for immigration legal release, it could be asylum, a juvenile visa or visas for victims of trafficking. There are some services, giving them some information about what they’re doing there. My sense is the kids understand kind of what’s happening but don’t really understand. They’re kids.

Do the parents have any idea where their children are, typically?
Right now what’s happening is no, the parents that are being separated from their kids are not being provided information as to the location of their children. If you go into federal court where they’re being criminally prosecuted, the parents will ask: “Where is my child? Will I be deported with my child?” The federal judges are just like, “I don’t know.” They’ll say something like, “My understanding is that eventually you will be unified.” We don’t know the veracity of those statements. Right now we’re at this point where we really don’t know what’s happening. We know parents are being separated from their kids, and that there’s an influx. These kids are not traditionally unaccompanied minors [until the government makes them so].

How warranted is the recent burst of outrage here, as evidenced by the viral nature of some of the stories on this stuff?
What’s happening is atrocious. It’s really unbelievable to separate a child from their parents, children as young as five. The parents don’t know where their child ends up. They’re being pushed through the criminal system and immigration system without any knowledge of where their children are and their children don’t know where their parents are. That’s against the whole point of unaccompanied minor reunification process. The whole thing is garbage right now. The kids are not being sent to any parent. It doesn’t make any sense.

Have you ever been denied access to one of these facilities?
I have been denied access to a client—at one of these facilities—a child. It’s outrageous. There is no respect for the attorney-client relationship. There was another Jane Doe case I handled [a second young woman who wanted to get an abortion] and they were just like, “You can try talking to the Department of Justice.” The Office of Refugee Resettlement is hellbent on denying access to reproductive health care for these young women. It’s an agenda of theirs. It didn’t surprise me that it happened to the senator.

What can the average person do who’s seeing this happen?
I think call your representative and ask them to look into this issue. Tell your representative: We do not support family separation, this kind of abuse of the American system and American ideals. We’re here to welcome people: Give me your tired, your poor, your hungry…. That’s absolutely not what’s happening here.