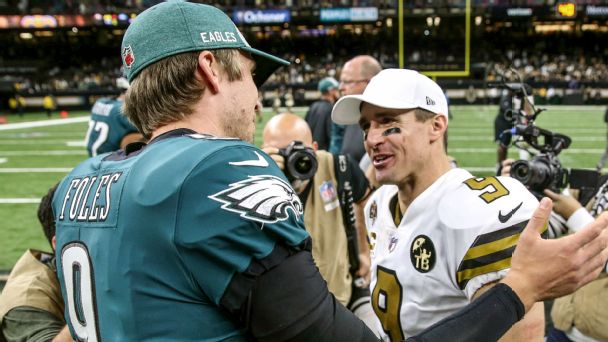 Darren Woodson says the Chiefs will “put big numbers up” at home, but Tedy Bruschi sees the Colts winning in their playoff game. (1:10)

But there’s one come-from-behind victory that most refer to when it comes to Luck.

The Colts fell behind 38-10 some 76 seconds into the third quarter before Luck did the near-impossible: He led them to a 45-44 victory — the NFL’s second-largest postseason comeback victory — by throwing for 443 yards and four touchdowns.

As the Colts prepped for Saturday’s game in Kansas City (4:35 p.m. ET, NBC) in the AFC divisional playoffs, Luck was asked about the rally.

That’s just Luck being Luck, not wanting to praise himself. What he did that Saturday night more than five years ago was, as long-snapper Matt Overton said at the time, “an ESPN Instant Classic.”

There are two poster-sized Sports Illustrated covers of Luck diving in for a touchdown hanging on the wall in the office of the team’s media-relations department.

“The quarterback played his tail off,” former Colts coach Chuck Pagano told ESPN this week. “You always have faith and belief, and Andrew gives you hope. Any time you trot him out there, your team has hope. I know it was an entire team deal, but he gives you hope.”

The four largest deficits overcome by the winning team in NFL postseason history:

Pagano, according to tight end Dwayne Allen, tried to get his players motivated by yelling and cursing at them at halftime, when the Colts were trailing 31-10.

The Colts got the ball to open the second half, but their very first play of the third quarter was Luck’s second of three interceptions. The Chiefs scored three plays later to take the 38-10 lead.

“I gave one of those ‘win one for the Gipper’ speeches and then go out and do that,” Pagano said. “Throw in the interception, and then the next thing you know we’re down 28 points. Amazing.

“I remember telling the guys there’s not a play you can score 28 points on. It’s impossible. One play at a time, same mantra. We just needed to catch a break here or there, and we did.”

The Colts got something going when they responded to Kansas City’s score with a 10-yard Donald Brown touchdown. But things started to change in their favor when Colts pass-rusher Robert Mathis had one of his patented strip-sacks on Chiefs quarterback Alex Smith. It gave the Colts the ball at their own 46-yard line.

“You always remember Robert Mathis’ strip-sacks because you grew up hearing about them, and then you get to see them live and it helps you,” Luck said. “I remember that being pretty cool.”

The Colts made it a 38-24 game five plays later on another Brown touchdown.

It was like it was meant to be for the Colts when Brown fumbled early in the fourth quarter, the ball bounced off center Samson Satele’s helmet and Luck grabbed it and dove into the end zone from 5 yards out to cut the Chiefs’ lead to 41-38.

“I remember turning around and seeing the ball on the ground and going ‘Oh s—!’ and Andrew grabs it and dives in,” left tackle Anthony Castonzo said.

Momentum was in the Colts’ favor then.

“Hop, skip and jump into the end zone and he scores,” Pagano said about Luck. “Just crazy. Once that starts to happen and that momentum switches, anything can happen. I think that’s where we finally caught a break and made a couple of plays. The strip-sack, that momentum and all that stuff, you just feel it on the sideline, and you’re like, ‘This is going to happen, we’re going to get this thing done.'”

And that’s what Hilton did, as he got behind Kansas City’s defense for a 64-yard touchdown pass with 4:21 remaining that ended up being the winning score.

“He launched it and I went and got it,” Hilton said. “It was fun. It was special. We just never gave up, never gave in. It was a tough game. It was pretty much down the whole game and then towards the end, we just found a way to get a dub.”

“You couldn’t relax, especially with the game Bowe had,” Pagano said. “I just remember that feeling when it was out of bounds, incomplete and it was over. Everybody was spent. Emotionally, physically.”

There wasn’t much to be excited about in Kansas City’s locker room.

“A lot of disappointment and shock,” Chiefs defensive lineman Allen Bailey said. “We had a 20-something-point lead. People were upset, angry, what happened. How it happened.”

Not surprisingly, the Colts’ locker room was a madhouse after the game. Players ran around celebrating, and some mocked the media for thinking the game was over when they fell behind 38-10 early in the third quarter.

“As individuals you can do amazing things, but as a team you can make miracles happen,” Pagano said. “We made a miracle that day with the second-largest comeback in the history of the National Football League. It’s really what we based our whole culture and foundation [on] was that process. It just solidified everything we were about and just again, you love those moments. Spending that time together after an amazing comeback like that.”