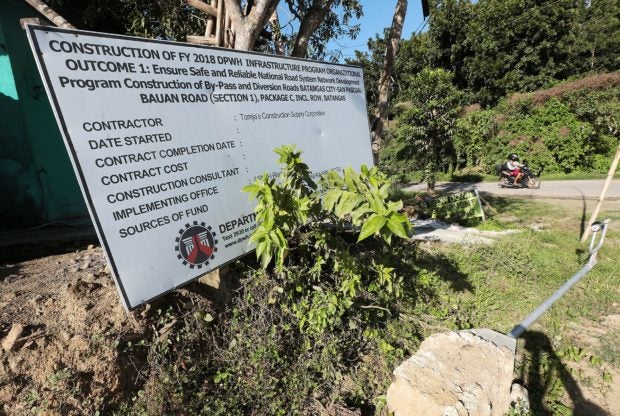 From above, a curious sight would greet anyone monitoring the progress of a multimillion-peso road project connecting Batangas City to San Pascual and Bauan towns in Batangas province.

The stretch of white concrete breaks off in one section, revealing an odd obstacle—a red-roofed bungalow that splits the highway into two roads and stands between the two ends so they can’t meet.

Elsewhere, another perplexing obstruction is seen on a diversion road linking Lipa City to Padre Garcia town: The road wraps around a portion of a large house that stands on property with which the highway overlaps.

On paper, these are typical examples of infrastructure projects funded by the government annually.

But aerial photos taken from drones paint a sorry picture of how taxpayer money is spent on big-ticket projects that may take years to complete, if at all, as a result of right of way problems.

“You can’t help but laugh or you will just get annoyed,” Sen. Panfilo Lacson said in a roundtable meeting with Inquirer reporters and editors in December last year.

Some P74.6 billion worth of road projects with right of way problems had zero or close-to-zero physical accomplishments as of October 2018, according to records of the Department of Public Works and Highways (DPWH).

In late 2017, Lacson tried to have P50.8 billion in funding for public works projects deleted during deliberations on the 2018 budget, arguing that those projects should not be funded.

He succeeded in realigning the allocations in the Senate version of the P3.8-trillion budget bill for 2018. But the funds were restored by the bicameral conference committee.

A senator confronted Lacson because one of the items Lacson wanted removed was a pet project of his.

“My colleague quarreled with me, saying, ‘That’s my district. I’ll take care of the right of way.’ But that’s not how it should be. I argued that [right of way] should be settled before we fund it,” Lacson said. “So this led to a stalemate.”

The DPWH stepped in, Lacson said. In a Dec. 4, 2017, letter, Public Works Secretary Mark Villar sought the restoration of the P50.8 billion.

“[The DPWH] promised us that the projects were implementable. They said these were good as settled already,” Lacson said.

He said he relented because “I didn’t want to be the villain.”

One year later, the time of reckoning arrived.

“Now, I’m asking them, ‘You said these were implementable, so what happened to those projects?’” he said.

Answering his own question, Lacson said the DPWH’s own records showed quite little physical accomplishment.

“Even those who moved to have the funds restored would be shocked by what happened to their projects,” he said.

All told, projects worth P74.6 billion with right of way problems “didn’t happen” because issues were not resolved in time, Lacson said.

“Were contractors paid? That we don’t know,” he said.

One example is the Batangas City-San Pascual-Bauan access road with an estimated budget of P1.104 billion. According to the DPWH, the 10.8-kilometer, four-lane access road is envisioned to develop the tourism and industrial sectors in San Pascual, Bauan and Mabini towns.

Batangas Rep. Raneo Abu, in a Nov. 3, 2017, Facebook post, said an initial P524 million had been allocated for the project, which was supposed to begin construction before Christmas that year.

To be fair, the project did get started, but aerial photos would show the extent of the right of way problem.

One photo shows a house standing on a plot that splits the road project into two.

Another photo shows a portion of the Lipa City-Padre Garcia Diversion Road wrapped around part of a house that stands on property affected by the project.

The diversion road is part of an estimated P2.1-billion project, including a 12-km road that is intended to ease traffic congestion on the route from Manila to San Juan, Batangas.

The obstruction poses a hazard to both the house and motorists.

The road leads to a private subdivision that is far from where it ought to connect to the highway.

This practice is not only wasteful but also illegal, Lacson said.

Under the Right-of-Way Act, the DPWH must first settle access problems before starting road projects.

In a Senate hearing last year, Villar said the DPWH was allowed to begin road construction once it received permits to enter from the landowners, even before acquisition.

He conceded, however, that other unexpected problems could crop up during construction.

Spending for right of way acquisitions has gone up in recent years.

In the proposed budget for 2019, P28.9 billion is being sought for right of way acquisitions.

Lacson said right of way problems were just some of the many questions he intended to raise at the resumption of plenary deliberations on the budget.

The DPWH is one of the few agencies left whose spending programs remain unapproved.