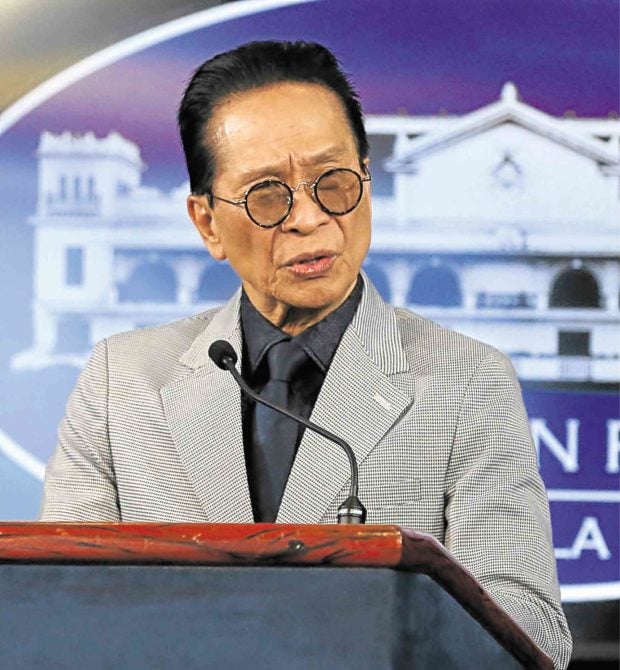 “The one holding hostage (the pay increase) would be Congress, not the executive department,” he said upon learning that Andaya’s basis for filing a mandamus case against Diokno was Malacañang not releasing the fourth tranche of the salary increase under the Salary Standardization Law (SSL).

But Panelo said the Palace shared Diokno’s earlier explanation that the fourth tranche could be released once Congress passed the delayed 2019 national budget.

The Senate has yet to pass the budget for this year because of its late approval by the House of Representatives.

In his petition, Andaya and 50 other government employees told Supreme Court justices that the reenacted 2018 budget had already provided enough funds to cover the last tranche of the pay hike for state workers.

Government employees are supposed to receive the last installment of their pay increase on Jan. 15 under Executive Order No. 201, or the Salary Standardization Law, they said.

“This goes beyond politics. This involves the salary of common government personnel which is being held hostage by just one man,” Andaya said at a news conference.

He belied the claims of Diokno and Malacañang that the Department of Budget and Management (DBM) could not finance the salary increase due to the delay in the passage of the proposed P3.8-trillion spending bill for 2019.

“We have a budget for this year. It’s called the reenacted budget. It’s even bigger than the proposed budget (which is still pending),” Andaya said.

“As we explained in our petition, there is a way of doing it. It has been done before,” he said.

“If we can pay the government’s debt even if they are not in the annual budget, why can’t we pay for the meager increase of our workers’ salaries?”

Andaya pointed out that the P99.4 billion in Miscellaneous Personnel Benefits Fund in the national budget for 2018 could be used to finance the salary increase, which would amount to P42.7 billion.

He said Diokno might also use the savings of the national government from the last fiscal year as a source of funds for the pay increase.

“There is no basis for the delay in the release and disbursement of funds as there are available alternative sources of funds for the fourth tranche of personnel benefits,” the petitioners argued.

They said that withholding the release of the funds was depriving the right to property of the petitioners and a curtailment of their rights.

Diokno said there was no forthcoming pay increase for civil servants.

At a press conference, he said there was “no legal basis” for Andaya’s claim that funds for the pay increase could be released even if the proposed budget for 2019 remained unapproved.

Under Section 11 of the SSL, the implementation of the yearly pay increases between 2016 and 2019 is “subject to appropriations by Congress,” Diokno said.

Section 15 of the same law states that “the DBM shall be authorized to implement or adjust the compensation corresponding to the appropriations provided in the GAA (General Appropriations Act),” thus making only that year’s actual budget — and not the reenacted budget — the source of funding for the scheduled salary increase.

As for the proposals to tap the Miscellaneous Personnel Benefits Fund to finance the salary increase, Diokno reiterated that this fund could cover only salaries in 2018.

Assistant Budget Secretary Myrna Chua said a total of 1.7 million civilians and military and uniformed personnel had yet to enjoy higher pay at the start of the year.