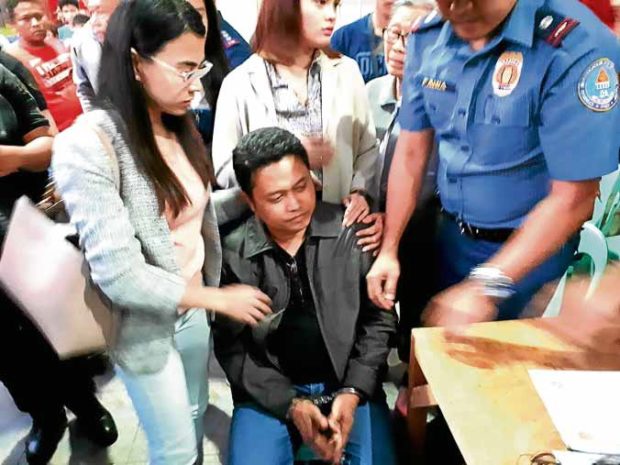 DARAGA, ALBAY—Daraga Mayor Carlwyn Baldo, the alleged mastermind in the killing of Ako Bicol Rep. Rodel Batocabe, was arrested on Tuesday for illegal possession of firearms, a nonbailable offense.

The search was witnessed by Baldo’s wife, daughter and mother, as well as by Warren Bahillo, village chief of Tagas.

Baldo has denied that he had a hand in the killing of the lawmaker, who had declared he would run against the mayor in May’s midterm elections.

The mayor was taken last night to the CIDG office at Camp Simeon Ola, where he would be detained and his mug shot and fingerprints taken.

Baldo was earlier named by the suspected gunmen as the mastermind in the killing of Batocabe and his security escort, SPO2 Orlando Diaz, at a gift-giving event at Barangay Burgos, Daraga, last Dec. 22.

All six suspects in the killing are in police custody.

The CIDG also recovered the Isuzu Alterra believed to be used by the suspects as getaway vehicle.

“I am innocent of any accusations against me. I did not order the killing of Congressman Batocabe and his security escort,” Baldo said at a press conference early this month.

“I assert my innocence. Let us not forget that while I am being used as a convenient scapegoat, those who are truly responsible for the crime remain free and blameless,” he said.

The mayor did not issue a statement about his arrest, which came a month after Batocabe’s killing.

On Friday, Baldo said at a press conference that a local court in Albay had issued a warrant against him to allow investigators to search his house for additional evidence in the murder of Batocabe.

Baldo said he was not bothered by the warrant but was worried about “planted evidence.”

“What scares me are the possibilities of planted evidence like a grenade and high-powered firearms,” he said.

“We know that these are nonbailable offenses when found in your possession,” he said.

Baldo gave assurance that he would face head-on all the accusations thrown against him in court.

In an earlier interview, Justin Batocabe, a son of the slain lawmaker, said the family would “welcome if a warrant of arrest will be served very soon on Mayor Baldo.”

He said that as a lawyer, he understood that due process would have to be followed.

“I am happy that all suspects are in custody and I thank the police and the Philippine Army for that,” he said.

The young Batocabe added that a person is presumed innocent until proven guilty.