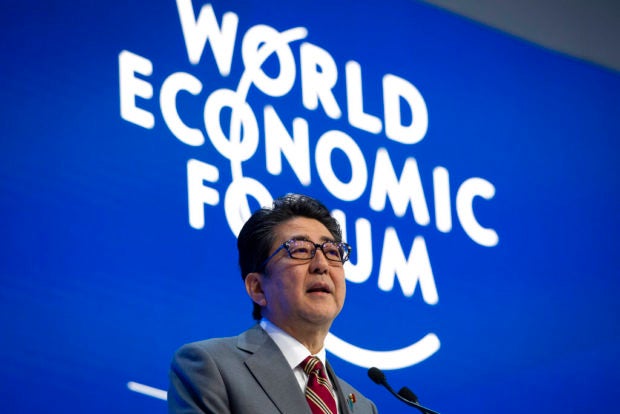 DAVOS, Switzerland — Japanese Prime Minister Shinzo Abe has touted the benefits of two recent “mega deals” in trade. He said Japan, the European Union and the United States must work together to reform the World Trade Organization, notably on rules about government subsidies.

Abe’s speech at the World Economic Forum in Davos, Switzerland, marked his return to the elite gathering after five years.

He referred to the Trans-Pacific Partnership wrapped up next year and the looming entry into force on Feb. 1 of the EU-Japan Economic Partnership agreement.

Abe urged a Davos conference hall to “rebuild trust toward the system for international trade.”

FEATURED STORIES
NEWSINFO
Flight attendants ‘forced’ by passenger to remove his pants and wipe his butt
NEWSINFO
Arroyo on age of liability: It was what Duterte wanted
NEWSINFO
House of ‘highly influential’ family in Parañaque raided