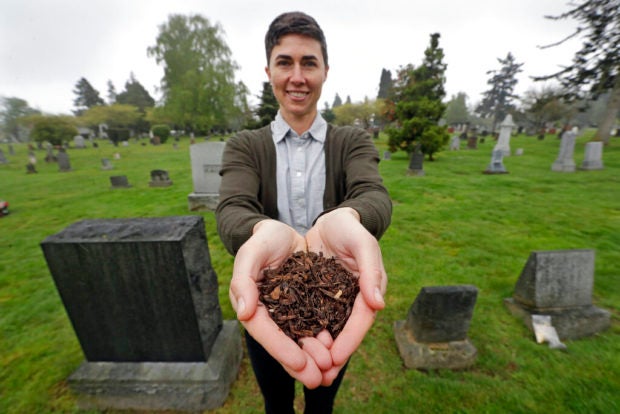 The bill legalizing the process, sometimes referred to as “human composting,” has passed the Legislature and is headed to the desk of Democratic Gov. Jay Inslee.

If signed by Inslee, the new law would take effect May 1, 2020. Inslee spokeswoman Jaime Smith said that while the governor’s office is still reviewing the bill, “this seems like a thoughtful effort to soften our footprint” on the Earth.
The measure’s sponsor, Democratic Sen. Jamie Pedersen of Seattle, said that the low environmental impact way to dispose of remains makes sense, especially in crowded urban areas.

The natural organic reduction process yields a cubic yard (0.76 cubic meters) of soil per body — enough to fill about two large wheelbarrows. Pedersen said that the same laws that apply to scattered cremated remains apply to the soil: Relatives can keep the soil in urns, use it to plant a tree on private property or spread it on public land in the state as long as they comply with existing permissions regarding remains.

“It is sort of astonishing that you have this completely universal human experience — we’re all going to die — and here’s an area where technology has done nothing for us. We have the two means of disposing of human bodies that we’ve had for thousands of years, burying and burning,” Pedersen said. “It just seems like an area that is ripe for having technology help give us some better options than we have used.”

Pedersen said an entrepreneurial constituent whose study of the process became her master’s thesis brought the idea to him.

Katrina Spade, the founder and CEO of Recompose, was a graduate student in architecture at University of Massachusetts Amherst when she came up with the idea — modeling it on a practice farmers have used for decades to dispose of livestock.

She modified that process a bit, and found that the use of wood chips, alfalfa and straw creates a mixture of nitrogen and carbon that accelerates natural decomposition when a body is placed in a temperature and moisture-controlled vessel and rotated.

Six human bodies — all donors who Spade said wanted to be part of this study — were reduced to soil during a pilot project at Washington State University last year. The transformation from body to soil took between four and seven weeks, Spade said.

A price for the service hasn’t yet been set, but the Recompose website states that the company’s “goal is to build a sustainable business to make recomposition a permanent death care option, serve people for decades to come, and make our services available to all who want them.”

According to the Cremation Association of North America, Washington state’s cremation rate is the highest in the nation. More than 78 percent of those who died in the state in 2017 were cremated, and that number is expected to increase to more than 82 percent in 2022.

Rob Goff, executive director of the Washington State Funeral Directors Association, said his group has been getting questions about the new process, and Spade has been a speaker at a series of recent district meetings of the association.

“To be able to provide more options for people’s choices is a very exciting thing,” he said.

Spade said that she doesn’t want to replace cremation or burial, but instead offer a meaningful alternative that is also environmentally friendly.

“Our goal is to provide something that is as aligned with the natural cycle as possible, but still realistic in being able to serve a good number of families and not take up as much land as burial will,” she said.

Pedersen said he thinks he may still want a marker in a cemetery when he dies, but said he is drawn to the idea of his body taking up less space with a process like natural organic reduction.

“I think it’s really a lovely way of exiting the earth,” he said.

Pederson’s bill also would authorize in Washington state the use of alkaline hydrolysis — already used in 19 other states — which uses heat, pressure, water, and chemicals like lye to reduce remains to components of liquid and bone similar to cremated ashes that can be kept in urns or interred. MKH