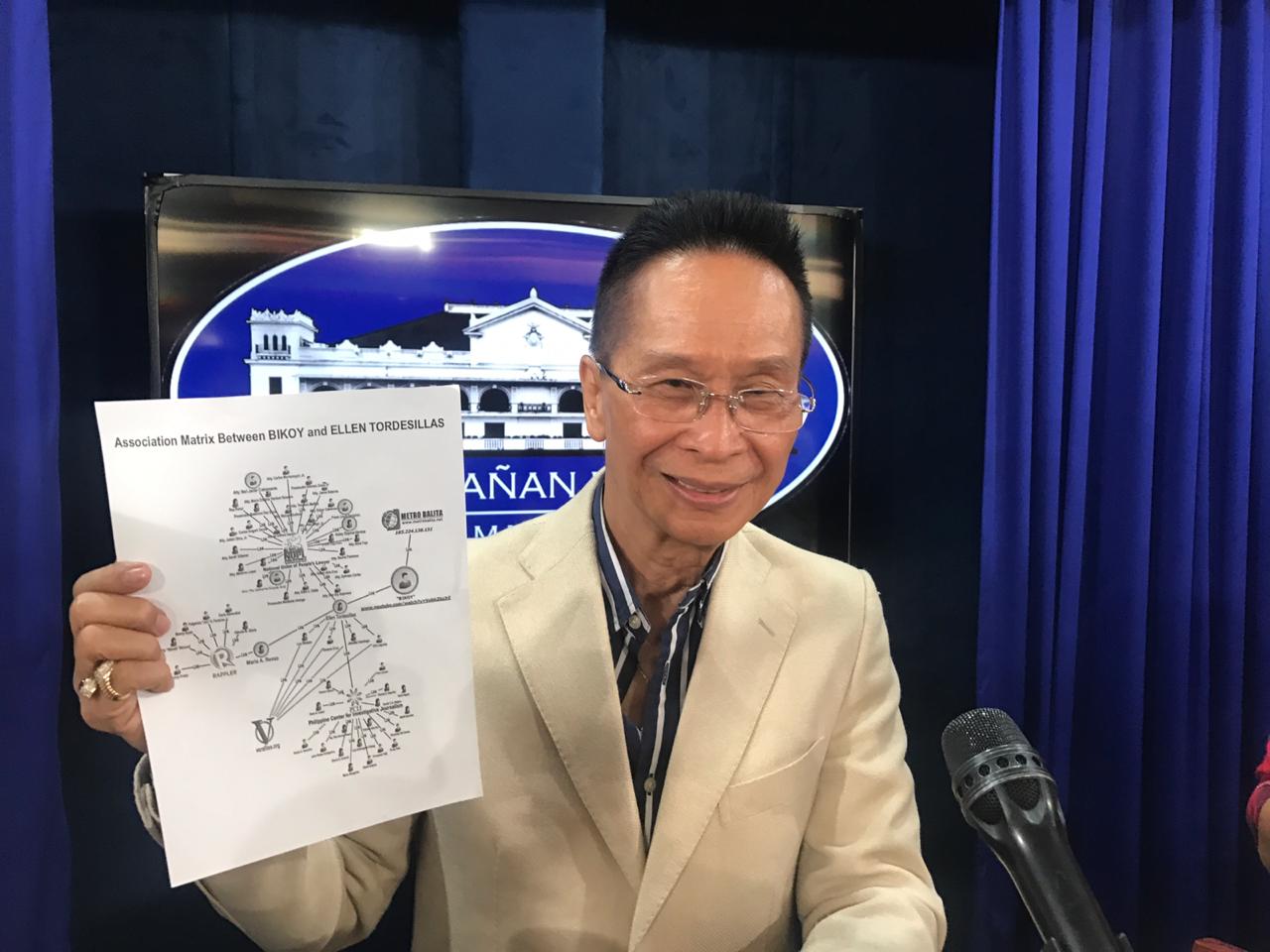 “I think I have to make a clarification and correction on the news that’s coming out relative to the matrix. Because it appears to me now that they’re saying that I changed my tune, I never changed my tune with respect to the source of the matrix. I said and I will repeat, it was the President who told me about the matrix,” Panelo told reporters in an interview in Malacañang.

In his April 22 Palace briefing, Panelo said the matrix he showed to the media came “from the Office of the President, from the President himself.”

But during the Palace briefing on Thursday, he said the copy of the matrix sent to his mobile phone came from an unknown number.

“Now, when I said that the diagram of the matrix was sent to me by a texter whose number does not appear in my directory, it only means that that texter could have been obviously instructed by the President to send me that matrix,” he said.

But why did he conclude the matrix sent to him was the one from the President?

Panelo, who is also Duterte’s chief legal counsel, said he was not interested to knwow ho the sender was.

“No I’m not even interested. It could have been any of the staff in the Office of the President. Ang importante dun, galing kay Presidente yun. Yun ang importante sa lahat. Hindi yung, parang pinalalabas hindi namin alam yung source,” he said.

In a statement, Panelo blamed the media for saying he has back tracked from his earlier statement.

“It is extremely ludicrous that some members of the media tweaked my statements made in the course of the press briefing yesterday, May 2, putting the impression that there was a backtracking of my original announcement that the source of the matrix is President Rodrigo Roa Duterte,” he said.

He then reiterated that “the source of the matrix is the President, who called me with the instruction to touch and discuss it during the press briefing on April 22.”

“A matrix was thereafter forwarded to my phone, obviously upon instruction of the President. The number of the sender of the diagram is not listed in my phone directory. Regardless from whatever number it was sent, I can assure that the matrix sent to me came from the President,” he said.

“The sender,” he added, “must be one of the staff in the Office of the President.”

“Considering as well the fact that the President did not correct or rectify what was released only means that it was the matrix being referred to by the President,” he said.

“Our office has access to a clearer matrix that can also be obtained online apart from what was published in the Manila Times, and we decided to use that one instead of printing the one sent to my phone which was unclear,” he said.

“In any case, I have made clear during the press briefing yesterday, May 2, that there is only one matrix. And that is the one released to the Malacañang Press Corps last April 22,” he added.

He also vouched for the veracity of the matrix released by Malacañang.

“It appears that there is a desperate move to taint the legitimacy of the subject matrix. We will let them be,” he said.

“As for us, it is our duty to inform the public, for they have the right to know, that there are plans to overthrow the President and that we will protect him and this Administration to make good our vow to the electorate of delivering genuine and meaningful change to the citizenry,” he added.

Following criticisms on the credicilityof the matrix, Panelo told reporters in Malacañang that Duterte does not release information that were not validated.

“Since the President has all the resources in the world to get information eh credible yun. Hindi naman maglalabas ang Presidente ng bagay na hindi niya na-validate,” he said.