It’s the spring, kiddos, and you know what that means: It’s UFO survey season.

For the 30th straight year, Chris Rutkowski and his private research group at Ufology Research studiously chronicled all the times Canadians reported encountering some sort of unidentified flying object in the last calendar year. The Winnipeg-based team concluded that in 2018 there were 937 UFO sightings country-wide—which is actually low compared to the last few years. On top of that the year also scored a 4.4 on the “strangeness scale”—more on that later.

Rutkowski, who’s one of Canada’s premier UFO researcher and has written several books on the subject, says that the process of chronicling every reported instance in Canada is a difficult one.

“Myself and my colleagues, we do have to go through every single case and look at what’s available regarding the report,” said Rutkowski. “When you have about a thousand cases every year, that tends to eat up some time.”

“It’s definitely the less glamorous side of The X-Files.” 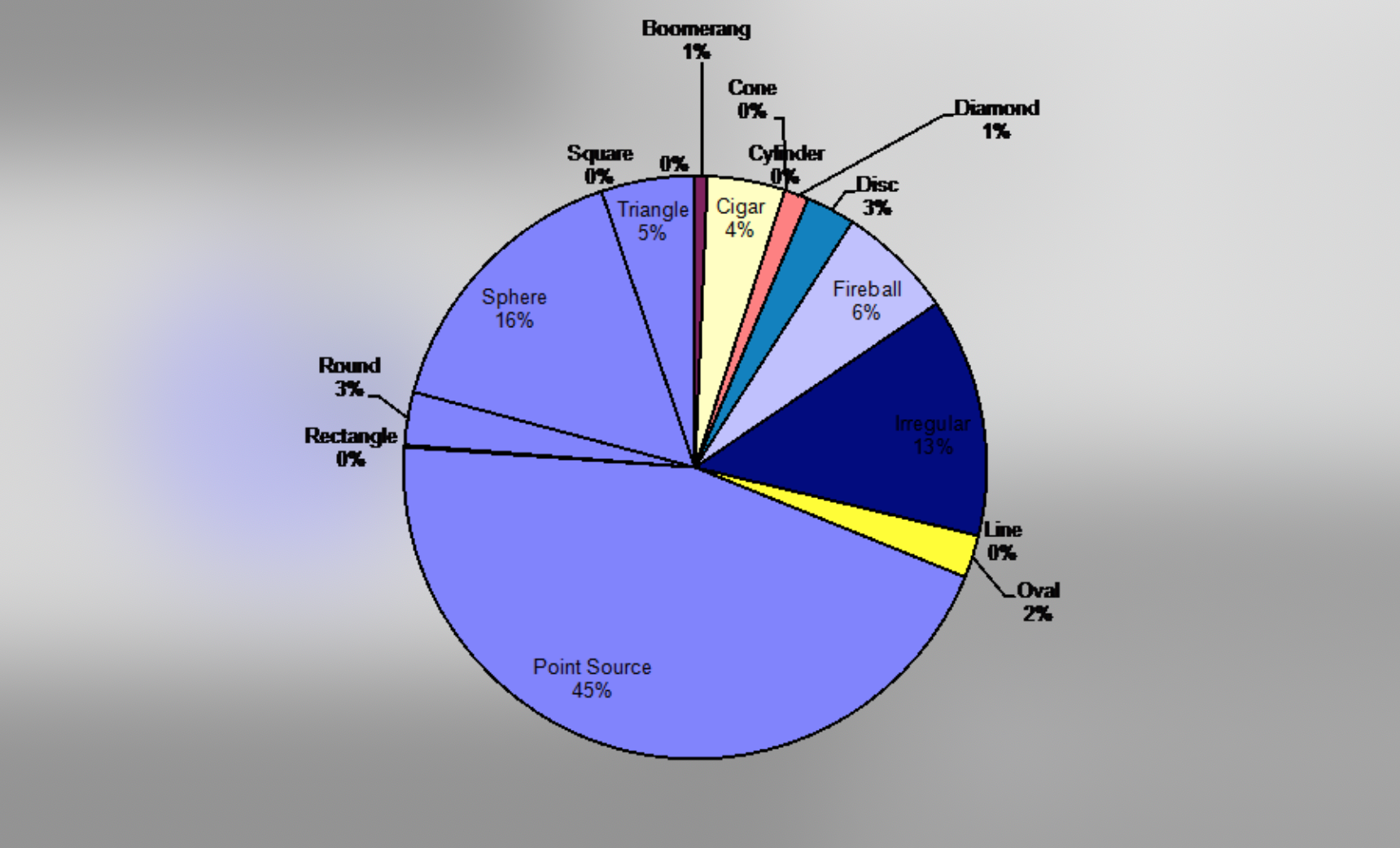 A breakdown of the types of things Canadians saw in the sky. Graph via UFOlogy.

In their survey, the group classifies UFOs as, “an object seen in the sky which its observer cannot identify.” They get their data from witnesses, other researchers, and large paranormal research groups like MUFON, online forums dedicated to the UFOs and the unknown, and data from Transport Canada and the Department of National Defence.

The province with the most sightings was Quebec, with 41% of the total UFO viewings and 25% of the Canadian population, and the typical encounter would last about 16 minutes. The majority of the encounters took place in the summer and, as one would expect, at night. While roughly three UFO sightings per day might seem like a lot, most weren’t, shall we say, exactly worthy of Mulder and Scully.

“They’re much less spectacular than what people see on TV and usually hear about,” Rutkowski said. “The typical UFO sighting is simply a light in the sky. People will just report seeing something that doesn’t look like an airplane, doesn’t look like a star or satellite. They want other people to know about it and be reassured they’re not going crazy.” 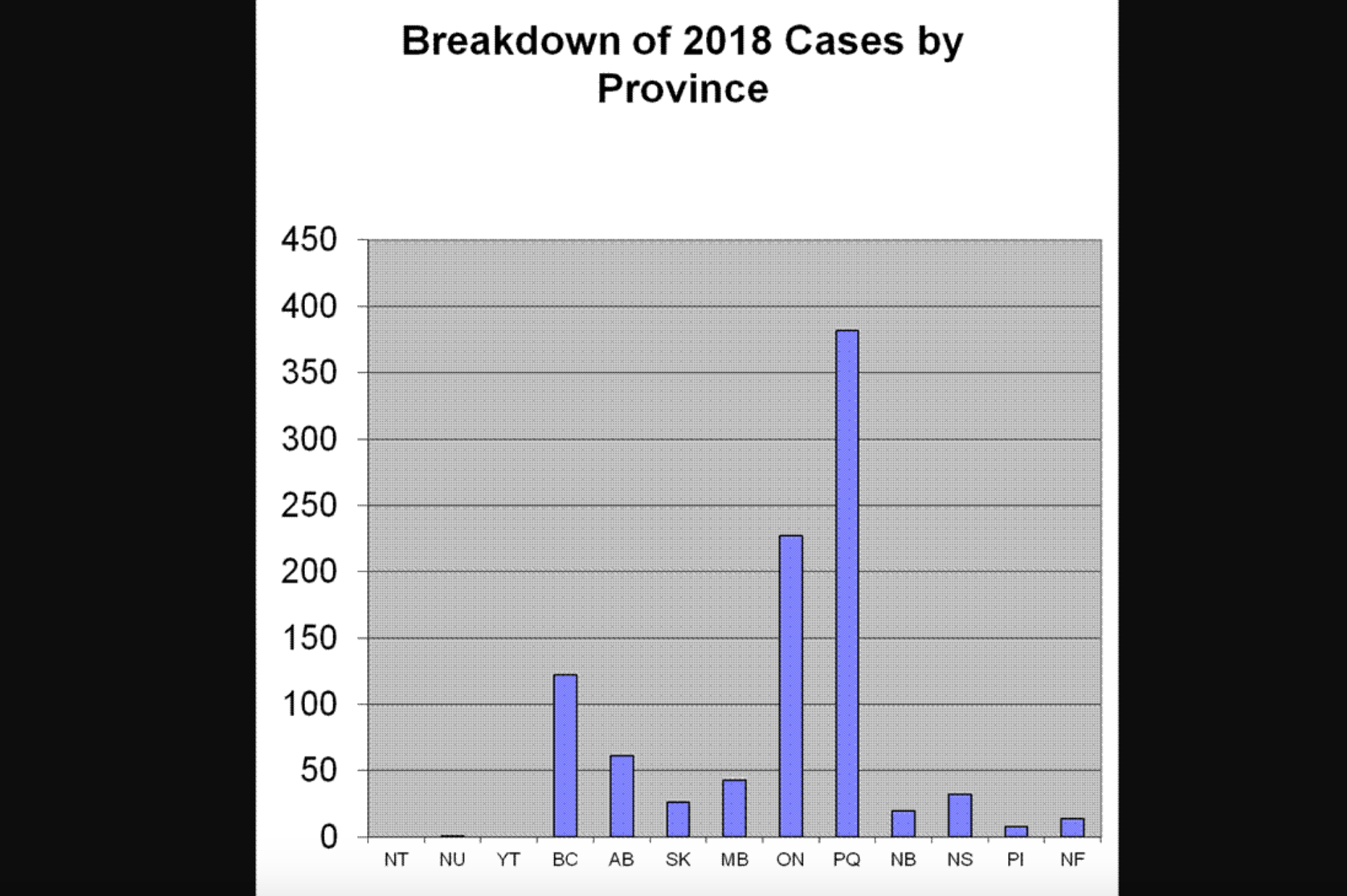 A breakdown of the provinces and their UFO cases. Graph via UFOlogy.

That’s not to say there weren’t any interactions that stood out though. Rutkowski said that in September, on Cape Sable Island off the coast of Nova Scotia, a whole bunch of people saw a balloon-like object floating against the wind. Witnesses who captured the object on camera insisted “the object differed in characteristics of a balloon.” Another good one took place a few months later in Yarmouth, Nova Scotia, when both a ship captain and a woman on the shore spotted a series of lights moving oddly in the sky.

“So these two separate witnesses saw an unusual series of lights moving over the sky and when it was reported it was found that Transport Canada made three primary radar returns at exactly that location at exactly that time,” said Rutkowski. “That’s not something you get every day.

“Is it as good as Roswell, Shag Harbour, or Falcon Lake?” he added. “Not quite, but it suggests there are some interesting things going on there that keep people scratching their head.” 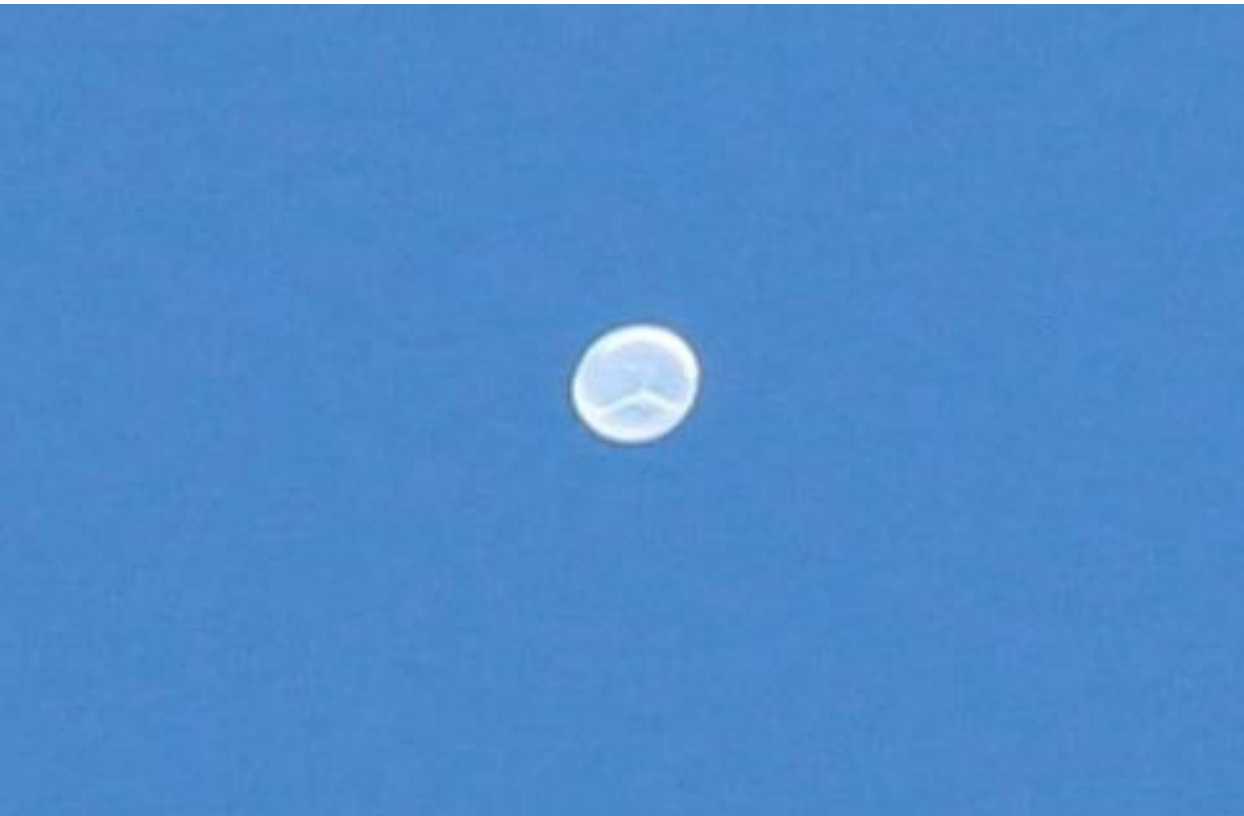 Among other things, the survey also breaks down what people saw (mostly lights and discs in the sky), what colours the objects were (mostly white), how reliable the observations are (typically not the most), and how many people witnessed the anomaly (one or two on average).

The crew also rates each report on strangeness, something they explain as “the degree to which a particular case is in itself unusual.” They use the example of how seeing a bright light in the sky isn’t particularly strange, but “a detailed observation of a saucer-shaped object which glides slowly away from a witness after an encounter with grey-skinned aliens would be considered highly strange.” (This is very true, that would be weird!) On a scale where “1 is considered not strange at all and 9 is considered exceptionally unusual,” 2018 got a rating of 4.4.

“We probably did get a few nines because some people did report close contact with aliens coming into their bedrooms, taking them away and doing things to them aboard their craft,” Rutkowski said. “Those cases do come about but what happens is they’re countered by the reliability index. There are very, very few cases that are highly reliable and highly strange.” 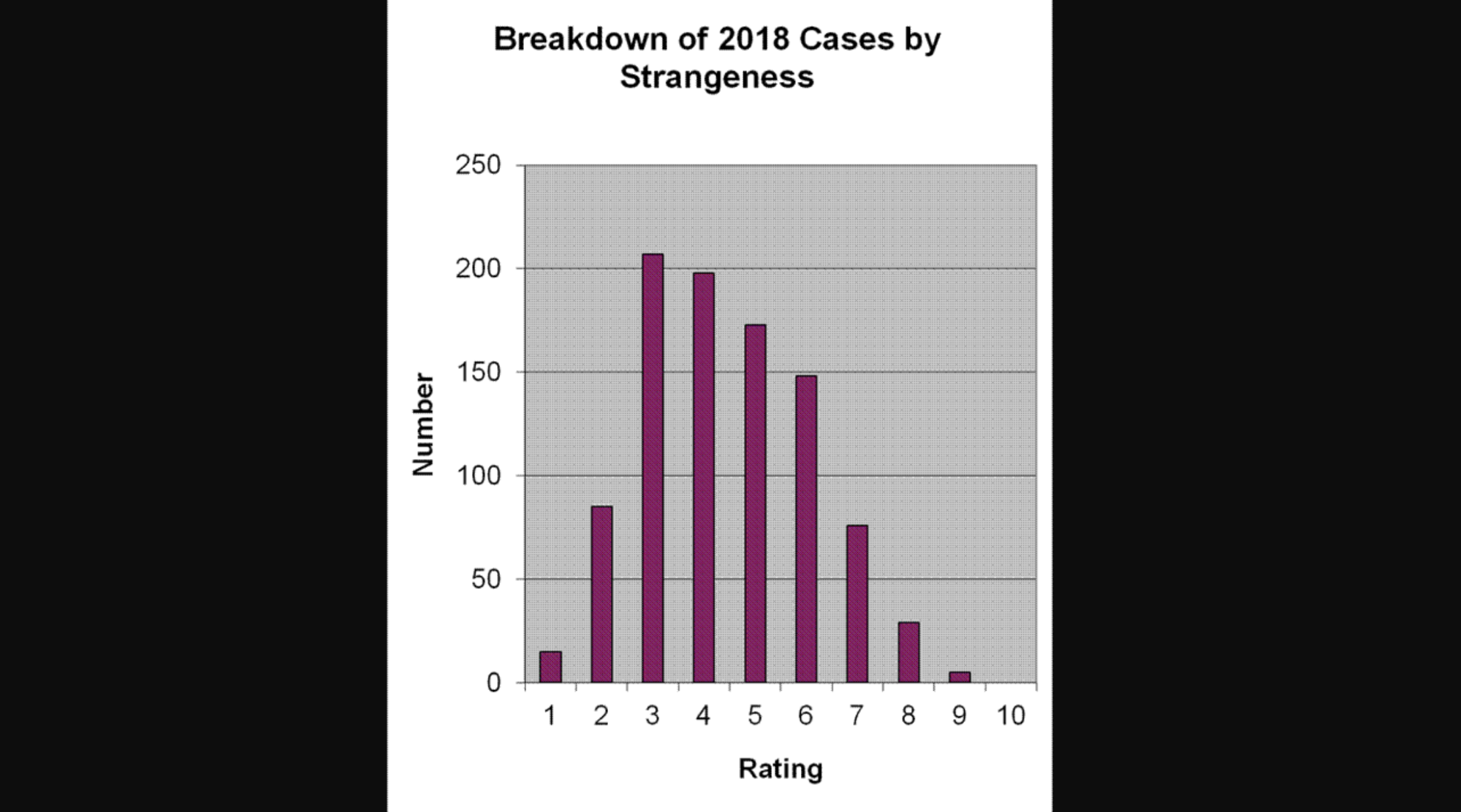 Rutkowski and his gang try and find an explanation for as many of the cases as they can—maybe it was a drone, the space station flying overhead, or search and rescue operation happening nearby—but sometimes they just can’t. This year about 5% of the reports couldn’t be explained by the crew.

“At the end of the day while we can’t absolutely say that there are aliens visiting Canada,” said Rutkowski. “We can say there is a phenomena that’s persistent and being reported by a good chunk of the population every year.”