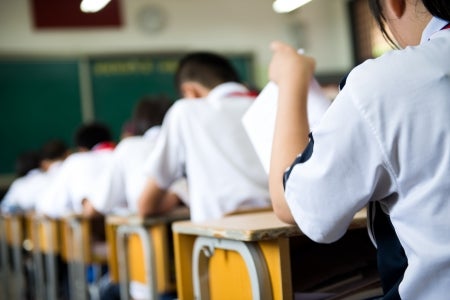 One teacher from Shaanxi, China, was given a demerit and had his teaching license revoked after verbally abusing a student in class numerous times.

The teacher, identified only by his surname Wang, was discovered frequently abusing his 13-year-old female student by insulting and cursing at her in front of her classmates. As per Shaanxi Television via the South China Morning Post on July 15, the girl had recorded over 100 clips of Wang’s abuse since she started attending Shangdan Gaoxin School in Shangluo, Shangzhou district, early this year.

The girl said she had been performing badly in class and claimed Wang wanted to drive her out of school by verbally abusing her and isolating her from peers.

“As long as it was his class, he would insult me. He kept cursing me, six times to nine times in one class,” she said in the report. “He told my classmates, if you stay with that idiot, you’ll become idiots too.”

In one audio recording, Wang told the girl not to attend school and threatened to kill her: “I’ll throw you to the ground, kill you in the classroom if you are still here next term.” He also asked the entire class, “Who is a b****?” on a different occasion, and did not stop asking until some students said the girl’s name.

As per the report, the girl’s family spoke to the teacher last April about the verbal abuse, but things apparently did not change.

Wang, on his end, denied insulting the girl, but said, “Sometimes I used some improper words.”

The district government launched a probe following clamor from the public. According to its statement last July 14, Wang was given a demerit and stripped of his license. He and education officials have also met with the girl and her family and apologized.

Meanwhile, the girl has been offered counseling and the chance to transfer to a different class or school. Cody Cepeda /ra