The existing Gowanus plant is a fuel oil and natural gas facility that has 32 simple-cycle combustion turbine units (16 can be dual-fired) situated equally across four floating barges that are moored to a pier located on Gowanus Bay in Brooklyn. One of the largest floating power plants in the world, Gowanus spans across 25 acres of piers and submerged land. The units are flexible and can start up with 15 minutes notice and are available year-round to offer system peaking capacity. The 1971-built plant is connected to an existing natural gas pipeline, a 138-kV transmission line to a ConEd substation close by, and water supply and wastewater pipelines. The 1972-built Narrows, also located in Brooklyn, features 16 simple cycle combustion turbine units, all with dual-fuel capability. 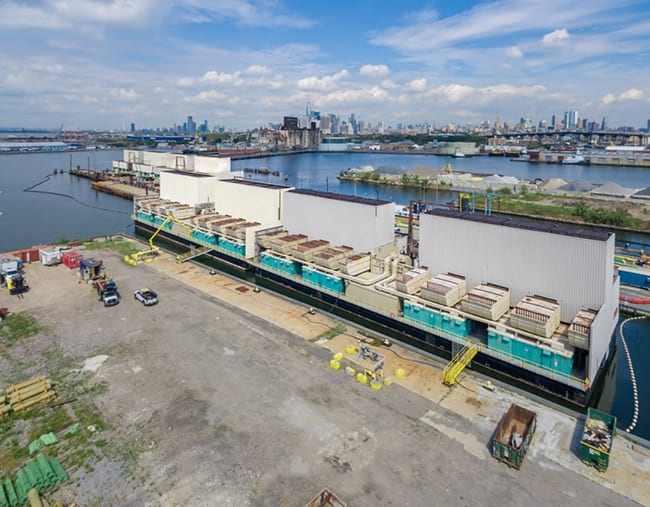 AGC, an Eastern Generation subsidiary, acquired both plants (along with the 959-MW Astoria Generating Station in Queens) from Consolidated Edison Co. of New York in 1999, as New York’s power market underwent restructuring. AGC last year proposed repowering the 1971-built Gowanus four-barge station and retiring the Narrows station because the aging plants faced new rules from the Department of Environmental Conservation (DEC) that would require add-on pollution controls systems for reducing nitrogen oxide emissions from older peaking units. The company noted in a December 2018 public involvement plan that it was also shaping its plans with consideration to New York Gov. Andrew Cuomo’s energy strategy to source 70% of the state’s electricity from renewable sources by 2030.

But AGC said that even with the state’s “laudable” policy and regulatory initiatives, “traditional in-City energy generation will be required for reliability purposes well into the future.” It noted the New York Independent System Operator (NYISO) currently requires at least 80% of New York’s City’s electric generation capacity needs be met through in-City generation. Along with flexibility and minimal environmental impact, it was also important that the repowered project was resilient, it said.

The current Gowanus facility, which is positioned to operate through “extraordinarily high tide and storm surges and to adapt to future water level rise,”  continued to operate through Hurricane Sandy with “minimal impact,” it noted. The plant, now approaching 50 years of age, was also one of the first generating stations to resume operations following the August 2003 blackout, ACG noted. Retirement of Narrows, it noted, also opens up the possibility of using interconnection infrastructure at the facility to support offshore wind resources or “provide opportunities for energy storage (potentially on barges),” opportunities the company said it is exploring.

Siemens in August 2018 told POWER that it had developed the heavy-duty concept for SeaFloat “to the point of readiness for series production,” but it had bagged only one major contract before the Astoria announcement. The company is marketing SeaFloat power plants as an alternative to stationary projects that can be used as baseload or emergency backup during peak loads or outages. Barges can also be supplemented with a desalination plant to provide potable water. “Mobility, flexibility and no need for land acquisition are the most prominent features which distinguish SeaFloat power plants from conventional land-based plants. These features come along with short lead time due to high prefabrication grade and enhanced plug and play concept as well as reduced overall project investments making them interesting for various applications,” the company said.

Under the Sept. 5-announced contract with ACG, Siemens will deliver two power barges, each outfitted with four SGT-A65 gas turbines. The A65, formerly known as the “Industrial Trent 60,” derives directly from Rolls-Royce’s 1996-launched Trent 800 engine, a machine often used in Boeing 777 Classic aircraft. Siemens has offered the the A65 for some years now as a flexible, efficient, and high-cyclic capability engine, ideal for peaking applications. The company has so far sold 115 A65 turbines worldwide, and it says it has accumulated more than 1.8 million fleet hours of experience running them.

While it is unclear when the New York project is slated to come online, Siemens says each aeroderivative gas turbine will deliver up to 76 MW in simple cycle service at 41.8% efficiency, running primarily on natural gas. The SGT-A65 turbine generating sets—which will have a total capacity of 300 MW—and a control system will be preinstalled on two newly constructed floating power barges. Siemens also signed a 20-year long-term service agreement to help support the gas turbines’s optimal operating efficiency. “Retrofitting the station with SGT-A65 gas turbines and generators will improve the plants’ power generating efficiency by nearly 50 percent while significantly reducing potential emissions of pollutants like carbon dioxide and monoxide—all while using the existing gas infrastructure,” Siemens said in a press release.

Siemens’ SeaFloat concept, however, can accommodate other models of gas and steam turbine generating sets, as well as battery energy storage systems. One such project is already under development. In December 2018, Siemens and marine arm of Singapore-based ST Engineering received an order from Bermuda-based Seaboard Corp. subsidiary Transcontinental Capital Corp. for a 145-MW gas plant and battery energy storage system that could be operating at the the Estrella del Mar III project in the Dominican Republic’s capital of Santo Domingo by 2021. The shipyard-constructed floating power barge will feature two Siemens SGT-800 gas turbines and one SST-600 steam turbine, as well as a Fluence Energy 5-MW/10-MWh battery energy storage system.

For more about why interest in floating power plants is surging—and for different examples of floating plants—see, “Novel Floating Power Plants on the Horizon,” in POWER’s December 2018 issue.