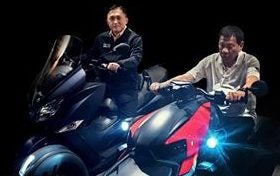 MANILA, Philippines – President Rodrigo Duterte is back on his motorcycle a week after he figured in an accident inside the Malacañang compound.

The President cruised around the Presidential Security Group (PSG) compound for 10 minutes, Go told reporters in a text message.

The President had to cut short his Japan visit earlier this week due to “unbearable” back pain traced to the motorcycle accident.

He attended Japanese Emperor Naruhito’s enthronement ceremony in Tokyo on Tuesday and was seen using a walking cane.

Duterte, 74, was advised by his doctor to rest.  Surgery to address the pain was not advised the President’s spokesman, Salvador Panelo said.

Duterte’s health has been a recurring concern due to his advanced age.

He recently bared having Myasthenia Gravis, an autoimmune disease that could potentially have fatal complications.

A lack of regular medical bulletins on the President’s health has sparked sporadic speculation about the state of his health, especially when he fails to appear in some of his engagements.

Transparency on the President’s health is enshrined in the 1987 Constitution.

Section 12 of Article VII reads: “In case of serious illness of the President, the public shall be informed of the state of his health. The members of the Cabinet in charge of national security and foreign relations and the Chief of Staff of the Armed Forces of the Philippines, shall not be denied access to the President during such illness.” /gsg