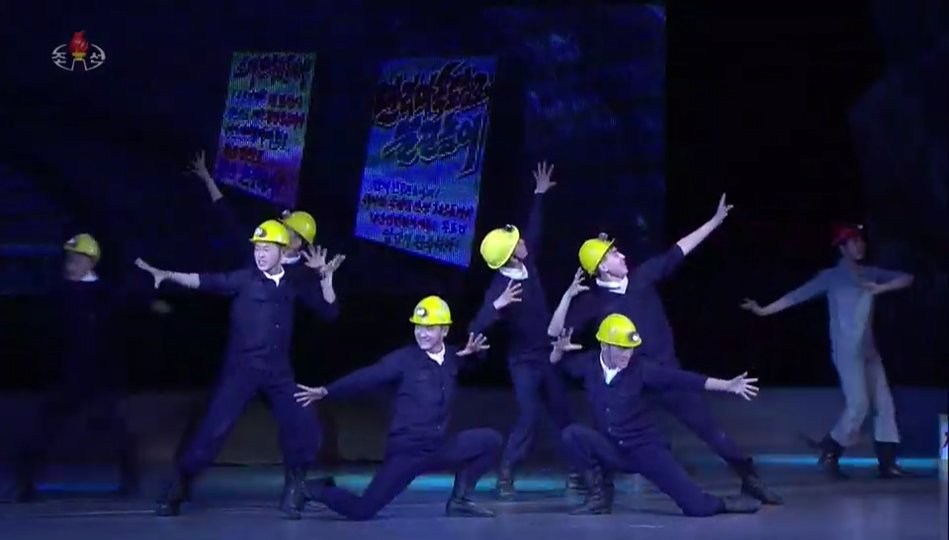 Whatever the outcome of Monday’ssummit between President Trump and Kim Jong Un winds up being, watching the two men occupy the same space in Singapore proved to be compelling TV. But as people around the world turned their eyes to the historic meeting, the citizens of North Korea were treated instead to a musical about miners via the country’s state-sanctioned TV.

BBC Monitoring reporter Alistair Coleman, who keeps track of media worldwide, tweeted some of the highlights from the big show in the DPRK. The patriotic musical featured both male and female performers singing, dancing, and drill miming while wearing construction helmets.

Things started on an upbeat note. By the looks of things, North Korean musical theater has adopted the fine tradition of using jazz hands:

But the opera, like most operas, soon took a tragic turn. Coleman said the whole thing turned “a bit Wagnerian” after one of the characters was killed in a tragic mining accident—hence the anguished faces, flowers, and melancholy accordion music.

There was an inevitable outing for the country’s flag:

And finally, before the curtains closed and regular programming resumed, the miners were joined by some benevolent military characters and everyone cheered under a stirring sunset.

The broadcast was a bit of misdirection from the DPRK, which generally waits to report on Kim’s actions for a few days to control the narrative. Had the cameras been rolling live for the meeting, North Koreans would have seen Trump showing that fake movie trailer the White House made, cracking fat jokes, or talking about his limousine.