I first heard about The Sopranos, which premiered when I was ten years old, from my mother, a psychoanalyst in private practice on Long Island who loved it then and happens to be in the midst of rewatching it now. (To be clear, my mom does not have a history of sneaking booze in-between patients the way Lorraine Bracco’s Jennifer Melfi does during a rough stretch.) Like many young American men, I had an early fascination with organized crime, with the world of caporegimes and loansharks, with wanton violence fetishized and glamorized by male-dominated movies like The Godfather and Goodfellas, and novels by male writers like Dashiell Hammett and Raymond Chandler.

But one thing I began to notice as I got older and actually watched the show myself was that Sopranos fandom wasn’t confined to narrow demographics like shrinks, or (OK, not so narrow) immature men, or mafia junkies, or Jersey natives. It took on, like so many contemporary Prestige Television dramas have since—for better and for worse—the status of part of the oeuvre of modern Americana.

So maybe it was inevitable that jointly watching or at least touching on the show, which premiered 20 years ago Thursday, has emerged as a key moment in many of today’s romantic relationships.

That binge-watching TV with your partner might help solidify the bond between the two of you is not exactly breaking news: At least some academic research has suggested these shows play the part of mutual friends, without the trouble of, you know, leaving your apartment. That much isn’t Sopranos specific, and could (and does) apply to, say, Mad Men or Breaking Bad. But a canvass of friends, colleagues, acquaintances, and strangers in their 20s and 30s suggested that just as The Sopranos has taken on a kind of rarefied (some say highfalutin) status in pop culture, watching it together—or at least connecting over it in some fashion—is a strikingly common benchmark in relationships, a gauntlet many couples must survive. 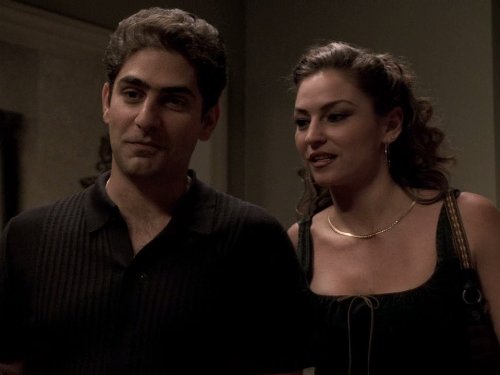 Obviously I spoke to people who were in perfectly healthy relationships despite having never laid eyes on the show, even if I found this baffling. But story after story jumped out at me: a date to visit the house that served as the model for Tony and Carmela’s mansion in North Caldwell, New Jersey, or new long-distance lovers saving episodes for the next time they caught up IRL, only to face an attempt by a jilted ex to spoil things with a text about Tony being shot by his Uncle Junior.

Then there were couples who watched the show together but didn’t necessarily see it as a pleasure cruise so much as an eerie (if also enjoyable) experience to undertake in unison. “Being trapped in a nihilistic white man’s brain for six seasons—it’s a weird thing to do, even for couples,” my colleague Wilbert Cooper, who watched the show with his now-fiancee, told me, adding, “He’s a cheater. Watching that show can bring out weird shit in a relationship.”

I was also struck by sweet and even touching stories that went far beyond, say, needing something to do together that wasn’t drinking or hanging out with a less-than-exciting couple for dinner.

“I developed epilepsy in the middle of my first round watching it, so I blacked out a bunch of stuff,” Molly Johnsen, a grad student getting her MFA in Poetry at Syracuse, told me via email. “Coincidentally, [her boyfriend] has revealed to me TWICE that Adriana dies. Like he managed to fuck up BOTH times. And I forgot he’d told me the first time, so he also had to reveal THAT information to me.” Watching the show has become something of a Sunday ritual for them, new “Peak TV” offerings be damned.

Lily Marotta, a comedian in Brooklyn, was never allowed to watch the show as a kid by her Italian-American academic dad who loathed romanticized mafia portrayals—as Melfi’s fictional friends do on the show. That left her to make her way through it as an adult, partly with an ex girlfriend and again more recently. She suggested watching it might be like taking a new paramour to a familiar—and great—restaurant, and that it resonated for young people because it simultaneously allowed the usual “which character are you?” level of fun even as its spectacular violence permitted viewers to maintain a healthy distance.

Which is to say, if you can get through the whole saga and look over at your partner and still feel something resembling affection—even love!—you know you’re in a good place. “For a younger millennial couple, I think you can see that and think: that’s so far from us,” Marotta told me.