The Electric Reliability Council of Texas (ERCOT) has issued a fresh warning that continued “above-normal” growth in electric demand could require it to enter Energy Emergency Alert (EEA) status to maintain system reliability this summer.

As it released its final Seasonal Assessment of Resource Adequacy (SARA) for the upcoming summer season (June  to September), a preliminary assessment for fall and an updated Capacity, Demand and Reserves (CDR) Report, the Texas grid operator on May 8 said demand this summer could peak at 74,853 MW—1,300 MW higher than the all-time peak demand record set last summer on July 19.

However on Wednesday, it also increased the planning reserve margin for summer 2019 from a historically low planning reserve margin of 7.4% to 8.6% based on resource updates incorporated in the final summer SARA report. “While operating reserves are expected to remain tight, total generation resource capacity has increased to 78,929 MW compared to the preliminary summer SARA released in March,” ERCOT said. “This is due primarily to the expected return of a 365 MW gas-fired unit, increased output from certain units that are undergoing equipment upgrades, and an increase in the amount of DC tie imports, which is now based on what is expected during emergency conditions.”

The updated CDR also estimates higher planning reserve margins between 2020 and 2023, “primarily due to an increased number of potential wind and solar projects that are currently in the interconnection queue and eligible to be included in the CDR,” ERCOT said. Since the December 2018 CDR, approximately 733 MW of installed wind and solar capacity has been approved by ERCOT for commercial operations, with summer peak capacity contributions of 333 MW. Another 22 distributed generation solar units totaling 143 MW were also added to the report (though they have a combined capacity contribution of 106 MW). Significantly, the new CDR report also includes 517 MW of battery storage, which became newly eligible for inclusion by 2023. 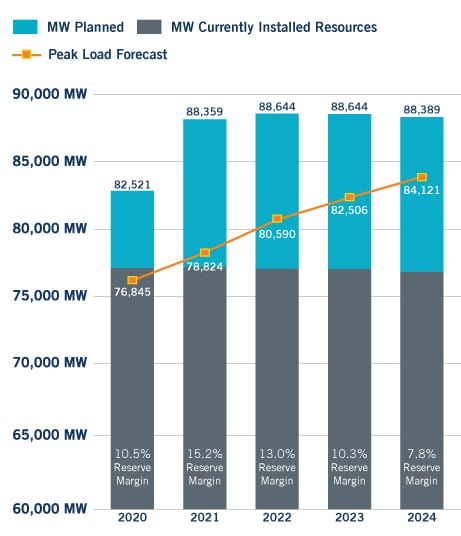 ERCOT has been preparing for tight operating reserves owing to a spate of recent plant retirements—including of about 4 GW of major coal baseload generation—and delays in some planned resources. “ERCOT is prepared to use the tools and procedures that are in place to maintain system reliability during tight conditions,” said ERCOT President and CEO Bill Magness on Wednesday.

The volatile reserve margins based on total capacity and fluctuating wholesale power prices have been a source of concern for generators operating in the market. Michele Gregg, executive director of the Texas Competitive Power Advocates (TCPA)—a group of generators that collectively produce about 60% of Texas’s power—told POWER that generators have been “doing their best” to prepare for the summer season, despite extraordinary demands to ensure reliability.

This March, Gregg noted, the grid operator asked generators to delay outages in advance of a cold-weather event, which led to a considerable peak, but did not require emergency actions. “And that created a problem, not just financially, but because they had to reschedule and many of them had contractors on the ground already. We also didn’t see the type of scarcity pricing that you would expect in that type of situation,” she said.

“The out-of-market action didn’t give the market an opportunity to actually work the way it was intended to,” Gregg added. “And so it creates some concern going into the summer that we’ll see more of that as opposed to allowing prices to do what they are expected to do in an energy-only market.”

But according to Beth Garza, vice president and director of Potomac Economics’ independent market monitoring for wholesale markets operated by ERCOT, fluctuating reserve margins are an indication that the market is functioning as designed.

“Installed reserve margin is the remainder of between how much capacity is installed versus how much peak demand is going to be,” she said in an interview with POWER at the Gulf Coast Power Association’s Spring 2019 conference in April. ERCOT’s assessments serve almost as a forecasted “temperature” of the market based on its information gathering. ERCOT, she added, has “limited responsibility” to take action on market retirements.

“If an entity wants to retire their unit, they must provide a notice to ERCOT, and ERCOT does an assessment of that. They do an evaluation and there can be situations because of local constraints on the transmission grid where ERCOT could say, ‘I need that unit because its in that location.’ And they have the tools to contract with that unit to remain in service,” she said.

Recent coal retirements weren’t in constrained areas, Garza noted. “It was just an overall reduction in capacity, and in that situation—to its credit, as you’ll hear everyone say—ERCOT allowed the market to work.”